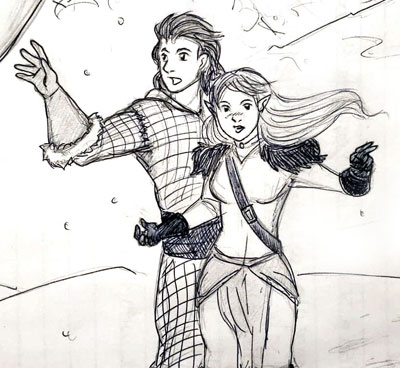 Eddiwarth raised his head. He hadn’t been asleep. Rather, he was just relaxing in a nice comfortable chair in his old bedroom. Of course, for the time being, he was sharing it with Parith and Korr. He had been trying to use his blue oculus to connect to Thissraelle but she hadn’t responded yet, leaving Eddiwarth feeling a bit down and even lonely.

“Well, come on in, I’m not asleep.” The door swung open and Parith and Illariel almost fell into the room. “This is your place, too, Parith,” Eddiwarth chided, “you don’t have to knock.”

“Can we use your oculus?” Parith asked hoarsely. Right away, Eddiwarth saw their fear and urgency.

Parith held up the large blue gemstone like he was inspecting it or figuring out how it worked. “Oh, it’s a flaming, stone-shaking mess, Eddiwarth. Umbrawood City has been attacked by dragons and high elves.”

Eddiwarth jumped to his feet. “What?”

“I don’t know much more. I guess the treecity’s burning. We need to try and get a hold of people in TreeHaven and see if they’re safe still! How do you use this thing?”

“Just hold it in your hand and focus your will on who you want to contact. What happened? When?”

“At this point, you know as much as I do.” Parith made a bowl with his palms and cradled the gem in it. He turned to Illariel and asked, “here, do you want to get in on this, too?” She nodded quickly and set her hands under his.

“Oh,” Parith interrupted himself, “the Seeker who told us about it wanted to see you. He’s in the parlor.” He and Illariel began to focus on the stone.

Eddiwarth stood, stunned, for just a moment. It’s really happening, isn’t it? Is this what all of those elders in Emberfire meant by reunification? Invasion? Conquest? What does that mean for Twynne Rivers?

So many questions bounced around Eddiwarth’s mind as he watched the oculus start to glow in their hands. I hope I can connect with Thissraelle! She’ll know more about what’s happening.

He stepped out into the short hallway and down the stairs. To the bottom, a quick right at the door, and he stepped into the small reading parlor. A tall, thin man in a gray robe of the Seekers spun around as soon as Eddiwarth entered. He was young, maybe a little older than the human equivalent of Eddiwarth’s own age, with chiseled and handsome features that looked a little familiar.

“Eddiwarth!” The man smiled and held out a hand. Eddiwarth took it with a bit of hesitation. “It’s good to see you after so long! So, so, long.”

Eddiwarth searched the dark recesses of his memory and came up empty. The face, the voice, and the mannerisms were all so familiar, but… Who is this?

“You don’t remember? I’m Hamrisonn. From the guild school.” All of the pieces fell into place and Eddiwarth’s memory lit up like a diamond oculus. Eddiwarth smiled, shook Hamrisonn’s hand vigorously, then grabbed his shoulders in a quick embrace.

Eddiwarth let him go and stepped back. “Right! You were a couple of classes ahead of me.”

“Yeah, as I remember, we didn’t interact all that much, until old Felaren sent us off after Thissraelle.” Eddiwarth gestured for him to sit down. “What happened that night on the barge? I got trapped in a dimensional oculus and I never heard from you again?” He remembered the scene. They had levitated down onto the giant’s barge and tried to capture Thissraelle, but hadn’t realized that there was another fight already going on.

Hamrisonn nodded with a half-smile. “That slippery little wiz of a girl blinked us away into The Vast and left me there, floating in chaos. I floated and wandered for what I thought was years, trying to avoid the vast beasts and entropy storms, until I stumbled into an outpost of the Seekers. They welcomed me and re-acclimated me to the Great Reality. I’ve been with them ever since. They’re so much more helpful than the Wizard’s Guild ever was. Of course, that’s all shut down, now.” He paused, then continued, “What about you? You must’ve gotten free of the oculus. Did you ever return the girl to her father?”

Eddiwarth explained, “Well, to be honest, it was more like me following her like a little lost puppy while she kind of found her way back home.” He thought of DeFrantis and Antonerri and the brothers at the abbey. He remembered Thissraelle’s fights with Karendle and being jealous of Granthurg’s close bond with Thissraelle.

Eddiwarth went on, “We fought drakes in the Cathedral, got rescued into The Vast, trekked across the Umbrawood Forest, and climbed up the side of one of the Emberfire mountains. We fought more dragons, and she found Heathrax and, finally, her family.”

“Heathrax?” Hamrisonn asked, “She’s the one studying with him now?”

Eddiwarth nodded. “So, that’s the short version. I left out a lot of details.”

“Yeah, like,” Hamrisonn teased, with a hint of sarcasm, “when you two fell madly in love and pledged to wed!”

Eddiwarth leaned back on the chair. “TreeHaven.”

“Yeah, that happened in TreeHaven. Sort of.” Eddiwarth remembered waking up after almost dying from sword wounds and flames to seeing her sleeping in a chair beside him, holding his hand. Other memories came as well, like their kiss on the snowy balcony overlooking all the tree homes of the village.

TreeHaven. Eddiwarth’s head jerked up. Has Parith connected? Is the village safe? He stood, just as his mother entered the parlor. A figure stood in the shadows behind her in the hallway. She had her nightdress on, a cap, and held her hands on her hips. “Eddi, will you be expecting more guests tonight?” She asked, stepping aside. Karendle stood behind her in a fine light cloak with her long red braid hanging over her right shoulder. She gave him a sad sort of smile while he jumped to his feet.

“Hey, Eddiwarth. Good to see you.” She sighed.

When Eddiwarth was young, particularly in the Wizard’s Guild School, he didn’t have a lot of real, good friends. He masked his awkwardness and social fear with being a joker and prankster. Since he couldn’t control his magic very well and was not serious enough to study too diligently, this was a recipe for trouble.

It wasn’t until he joined the party that he started to build relations with good friends. Even that wasn’t easy. He clashed with Thissraelle and Karendle and generally made a nuisance of himself. It takes a certain amount of social skills to build good friends. That, and patience on the part of the good friends.

If you think back to your good friends, it’s often true that those friendships have been rocky at moments, haven’t they? Tell us a story about