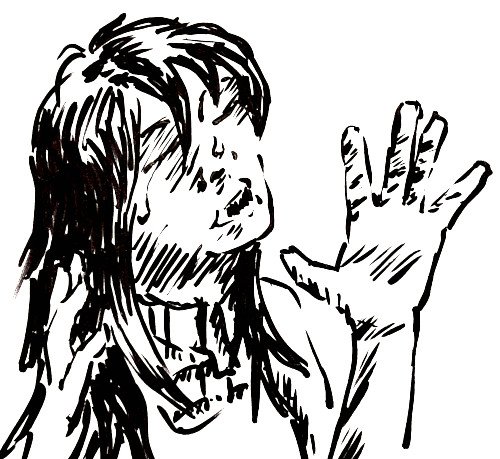 The large red dragon wearing the crown raised his head and roared. He spread and swept his wings, throwing forward a great rush of wind. Terror gripped Shylai’a’s chest like a vise. She tried to breathe but couldn’t. She heard a scream and wasn’t sure if it was hers or not. Tension shot through her limbs and she stumbled back, then ran. Where’s the doorway? How do I get out of here? She saw a pillar to her left and scrambled toward it. Rain fell all around it from a gaping hole in the roof, and she slid across the slippery floor. Fighting for balance, she reached out for the pillar and pulled herself into it, then slipped down to the floor, turning, until she hid with her back to it. Rain fell on her shivering head, drenching her hair.

Heart racing, breath ragged, she hid herself. She heard screeches, screams, and blasts of flame echoing around the hall. She swallowed hard, and breathed deep, letting the rain cool her fear.

She climbed up on one knee, turned around, and looked out from behind the pillar. She saw Parith across the other side of the hall shooting arrows up at the dragons from behind another pillar. Illariel, riding on Ari’s back, waved her arms and a wall of stone rose up from the floor, blocking a dragon’s flame. A drake landed on top of the wall and screeched at them. Before it could attack, Ari lifted her forelegs up high, tucked her abdomen under, and coated the drake in webs. Illariel clung to the hairs on Ari’s head and jostled as the spider screamed out a hiss and dropped back forward to the ground.

There he is! A long thin drake flew at him, snarling with its teeth bared. Korr spun, using his arms to redirect the drake’s head away. The beast’s forearms and wings swept forward, but Korr dropped low underneath them as they passed. He rolled back to his feet as the drake turned in the air to attack again.

Shylai’a rushed from her hiding place, shouting, and slashed at the drake, nearly carving it in half. It screeched and dropped to the floor.

Korr smiled at her for a moment and nodded, then whirled around. He set his feet into a solid stance and readied his hands. Shylai’a shook the rain from her hair and rushed to stand beside him.

The floor shook as a large blue and white dragon dropped from the air near her. Snarling, it focused just for a second on the stone pillar where she had just been. It began to glow with a blue light. As the beast jerked its head, the pillar snapped from the floor with a crack and a rumble and flew across the hall floor, bouncing and cartwheeling between the combatants before smashing into the pillar where Parith was shooting. The impact knocked Parith off his feet, and the split pieces of the tossed pillar rolled away on either side, leaving a huge fracture in the stone of the standing fixture.

Beyond the hall, a troop of soldiers ran into the fray from a broken doorway in the side of the hall. Shylai’a’s hope dropped and she stepped back. How can we take all of this? She grabbed at Korr’s cloak collar and tried to pull him away, but he was unmoving.

“Look!” he shouted. She followed his pointing direction to see drakes swooping in to attack the soldiers and acolytes as well as the party. “And up there!” Korr shouted. Three gigantic spiders descended from the rafters on silvery threads. Two of them already had drakes in their fangs, wrapped up in webs. A fourth had shot webs into the face of the blue dragon beside her, and while it roared trying to free itself, it dropped onto the wyrm’s neck and plunged its fangs in deep.

Shylai’a screamed her own war cry and rushed the squirming dragon. It raised up on its back legs and shook its head and neck, tossing the spider aside like a discarded hat. As Shylai’a ran, she shouted, building up a force of strength and of will through her legs, hips, and back. She channeled all of that force into her arms as she struck the dragon, and her sword sank deep into its gut, almost to the hilt.

Immediately, the gash sprayed her with thick purple blood. The dragon screamed in pain and swung his foreleg, slapping her off her feet and tossing her across the floor where she fell, tumbling to the stone. Pain shot through her legs and wrist as she rolled to a stop. She lifted herself up and saw another dragon’s head rushing down toward her, maw wide open. Smoke streamed out of its gullet and flowed out either side of its mouth. She raised her hands to shield herself, even knowing that it wouldn’t help protect her from the spray of flame to come.

Korr’s legs stepped over her, straddling her knees, his torso blocking her sight. His hands, held palms-together at his side, glowed with hot orange and red. As he separated them, the glow became a bright ball of power between his hands. He grunted a loud “Kyaa!” and shoved the blast up at the dragon. It exploded onto the side of its head with a loud echoing crack and a flash of bright light. The dragon’s head flew back and it stumbled, knocked onto its side, shaking the floor again.

Korr stepped aside and reached for her arms. She smiled, grabbed a hold, and he began to pull her up. Through the pain, she was able to stand. Korr hurried her aside, and she limped the best she could. She heard the dragon roar behind her. Korr looked back, then shoved her forward. She fell, groaning, as she hit the floor and rolled onto her back.

The dragon’s head swept forward, catching Korr in its jaws and biting down hard. It lifted him up high as it rolled back onto its feet, shaking its belly. Its neck flexed, shaking Korr from side to side, then with a hollow retching gag it spat out an explosion of flaming bile. Flames sprayed from Korr’s body like a fountain almost blocked by a stone.

The dragon opened his mouth and let the burning body fall to the floor, surrounded by the pools of flame that had spread out from the spray.

Her mouth was dry, her throat raw, and her breath shaking. She frantically searched the floor for some kind of weapon. I don’t care. I’ll kill it with my bare hands if I have to.

In a still-smoking area of the floor, blackened and scorched, she saw a dagger. A white-bladed curved dagger. Her eyes flared wide and her teeth clenched. With a growl, she crawled to the blade and snatched it up. She scrambled to her feet, and screaming, lunged at the dragon, driving the dagger deep into its flank. While it screamed, she stabbed it three more times.

She pulled it out and staggered back, gasping for breath. She wiped the hair out of her eyes and saw another dragon trying to attack someone. She couldn’t tell who and she didn’t care. Roaring as loud as she could, she rushed at the beast, slashing it open along its tail and hip. Purple gore splattered over her as she spun to rush another dragon. It saw her coming and reached out, grabbing her in its claws and lifting her up toward its mouth. It squeezed her tight, crushing out her breath, but she stabbed into its fingers over and over again. It screamed and tossed her aside.

She hit the floor and rolled again, coming to a stop against a fallen piece of stone.

“Korr,” she moaned, trying to stand. She had to kill more dragons. She could barely move and fell back to the floor.

“Korr,” she whispered again, trying to pull herself with her arms.

She looked at her hands, shaking and covered in purple blood. “I’ve lost the dagger. I’m done. I’m done.”

Her head slumped to the stone.

Shylai’a didn’t know Korr very long. Only a few weeks of in-story time, actually. Still, in that short time, they connected and became good friends. So, when she sees him be brutally killed here today she doesn’t have much time for grieving before she rages in anger.

Grieving is a complicated process and one that can take a long time. There are specific steps that therapists have identified as “the grieving process”, and though they do have an order, someone who is grieving may not follow them exactly as they are spelled out, and often will jump back and forth as they transition from one stage to the other.

The first stage of the grieving process is denial, where the hurting person will reject the reality that their loved one is gone. The second stage of grieving is anger where they lash out at the world around them, often irrationally.

Here, Shylai’a is shocked to see her friend Korr bitten and flamed by a dragon, and immediately her mind starts grieving in shock, horror, and denial. Then, she lunges for the dagger and in rage begins slaying any dragon she sees.

Later, as the story continues, she’ll have more time for grieving and will step through the process.