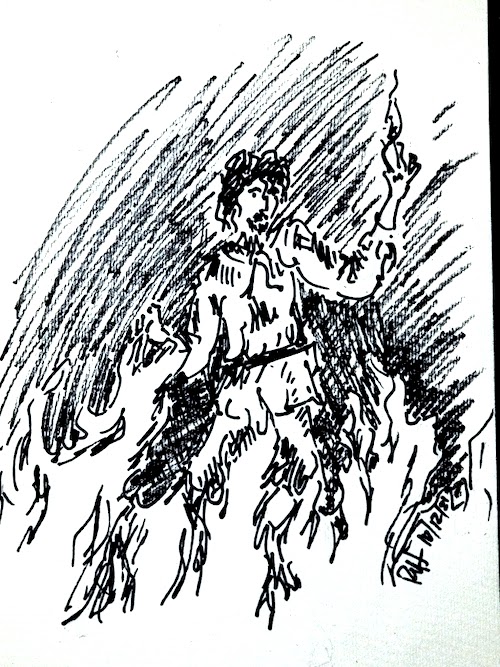 To do what a support does best…

Eddiwarth crouched down low against the wood of the wagon floor. It had been blasted onto its side by the power of the two mages across the street, turning its normally-horizontal bed into an impromptu defensive wall.

He wouldn’t be able to stay there long. Not only could they overpower him, but the wheels and underside of the wagon were burning. At the moment, the wood of Eddiwarth’s unburned side was only starting to warm up. Soon it would get hot, then unsafe.

It seems that a lot of these Dragon’s Flame guys use striking magic; fire and blasting. Not much mental, light, or even natural powers.

Two stories above him, on the roof of a nearby building, Eddiwarth saw Parith hiding behind a chimney, his bow at the ready. He leaned out, aimed, and loosed an arrow then quickly ducked back and drew another.

Ah, he’s why they haven’t rushed me. He nodded up to Parith with gratitude, who nodded back before shooting again.

A burning spark flew over his head and hit the facade of the building underneath Parith. With a deafening roar, it exploded. Slivers of singed wood and chunks of dried clay wattle scattered all around him. Eddiwarth closed his arms and legs protectively.

Parith! Shouts and drake screeches echoed off the buildings in the aftershock. Eddiwarth scanned the roof. In spite of the destruction below, the chimney was still intact and Parith secure. He slipped out and loosed another shot. A scream of pain added to the din.

The facade of the building was now burning, and the fire was growing. Between the heat radiating across the short distance in the street and the burning of the wagon, Eddiwarth knew it was time to move.

He looked out from behind the wagon. Shylai’a and Korr were fighting a drake a dozen yards down the street. Illariel’s wall was starting to crumble under the assault of the mages, but Illariel herself had managed to get the people across the street and into a shelter.

So, these people like dragons, eh? Hmm. An idea took shape, and he checked the roofs around the area. This won’t be easy.

He cleared his mind and called up his will. His temple throbbed with the surge of power in his mind. He closed his eyes and imagined a full dragon, a blue, with great outstretched wings and a gaping maw. He imagined it rising up behind the buildings and flying over him into the street. He could see it rise, ghostly and transparent into the air above him. He projected that imagination into the minds of the cultists, hoping that they would see the illusion as real. Shouts and sounds of running confirmed the effect.

He stood and turned to run to Korr and Shylai’a, but found he was almost too weak to stand. He stumbled but braced himself on the now hot wood of the wagon. Whew! That took a lot of will! It won’t last long, either.

Weak and terrified cries cut through the growing flames of the building face. The heat was bearing down on him. He listened carefully and heard them again. There are people in there!

“Illariel!” He shouted over his shoulder. “This way! Hurry!”

This time he heard the words through the crackling flames. “Help us! Save us!”

With the imaginary dragon still holding the cultists at bay, Eddiwarth lunged forward and limped to the building. Heat pressed in on him and welled up inside of him. He lifted his leg and stepped over the burning remains of the wall. Smoke clouded his vision and the waves of heat and flame made it hard to see. He pushed aside a few charred and glowing beams. The room was a devastated wreck. Tables and chairs lay shattered and burning, strewn all over the floor. Flames licked the wall and danced across the ceiling overhead.

He saw, in the corner, behind a long table resting on its side, a pair of faces looking at him, eyes wide. Eddiwarth lurched toward them, his legs weak. “We have to get you out of here,” he said in a raspy, smoky voice. As he came up to the table, he saw two young children with terrified eyes, no older than eleven winters, cowering behind the table. A man, probably their father, lay behind it.

Eddiwarth circled the table and reached out to him, coughing. “Here! Get up!”

Eddiwarth followed the man’s finger. His ankle was held down by the heavy wood table and was probably broken. Eddiwarth grabbed what was left of one of the table legs and tried to lift, but didn’t have the strength.

Eddiwarth glanced up. “Over here! Come help!” He tried to move the table again, but couldn’t. Once again, he cleared his mind, seeking deep for the last bit of will in his soul. It welled up inside him for just a moment and the table took on a soft flickering glow of blue. He shifted it slightly to the side and it dropped with a thud then collapsed to his knees.

“Are you OK? What are you doing?” Illariel shouted to him as she approached, “You walked right into those flames!”

“Heal him,” Eddiwarth gasped, “and get them out of here. See if there’s a way out in the back.”

As Illariel clambered past the table and tossed a few chairs aside, the man begged, “Take my boys. Get them safe!”

Eddiwarth slumped in exhaustion. It was hard to breathe, and the heat was oppressive. Sweat ran down his face. He rolled onto his side and tried to stand up, but the strength had left his arms. His will was gone. He might have actually tapped into his lifewell a bit to do that last trick. Maybe the dragon illusion was a little too much. Should have saved more for…

Illariel was helping the man to his feet. “Go!” She shouted. When he hesitated, wanting to help Eddiwarth, she pushed him. “Get your kids away. I’ll help Eddi!” With another shove, they turned and ran.

Eddiwarth slumped back to the floor. Illariel knelt beside him. She coughed, “Can you make the flames go back?”

Eddiwarth shook his head. “I’ve got,” he swallowed hard, “nothing left.”

Another explosion hit the front of the building. Eddiwarth turned to look and saw two silhouettes in what looked like robes in the gaping hole left in the structure. Their hands were raised and dripping sparks. He tried to breathe but only hacked.

“Of all the flaming luck,” Illariel spat.

Eddiwarth closed his eyes and rested his head. Sleep would be nice. Maybe I’ll just take a nap.

Author’s Note: How to be a good support

Of the three basic combat roles, I’ve always thought that the support has the toughest job, especially in The Hero’s Tale. The offense player is out there doing damage, the tank is drawing attacks and taking damage, and the support’s job is to keep everyone else standing.

An offense fighter can focus on the enemy in front of him, but the support has to understand what’s going on over the whole skirmish. The support has to jump here to heal, jump there to bless.

I’m not sure if Illariel really knows that she’s the “support”, but she’s dropped into it pretty well. I think it really started way back in book two when she found Thissraelle and her first thought was to help her instead of to be afraid or to attack. That’s what a support does!