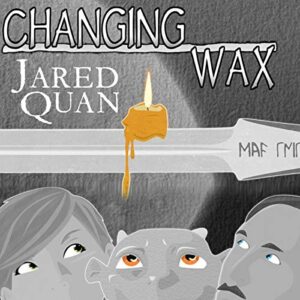 I probably should say up front that Jared is a good friend of mine. He and I have been involved in the League of Utah Writers and the local arts council together, and he’s a great guy.

I had never actually read anything of his until a few weeks ago, when I picked up the audible for “Changing Wax”, which I thoroughly enjoyed. It’s a quirky fantasy that kind of defies description. In the end, the best way I could sum it up is: “Imagine if ‘The Hitchhiker’s Guide to the Galaxy had been a fantasy…”

Wax is a strange land, ruled by strict and detailed laws and magic. There is a light side to the land, and a dark side. However, not everyone in the dark is evil, and not everyone in the light is quite so good, either. A number of small and insignificant characters enter the story, and start to navigate slowly merging paths in odd and hilarious ways. Other characters, leaders of the two sides of the land, seem to want them dead, and still other characters, supernatural ones (whatever that means in a world where almost nothing is “natural”) are playing the rest like cards in a very strange game of Uno.

Does that make any sense? No? Well, fortunately, the book does, but you have to be patient for the reveals.

Anyway, it’s a fun read, only made better by the snarky brittish accent of the reader.

This IS an affiliate link.