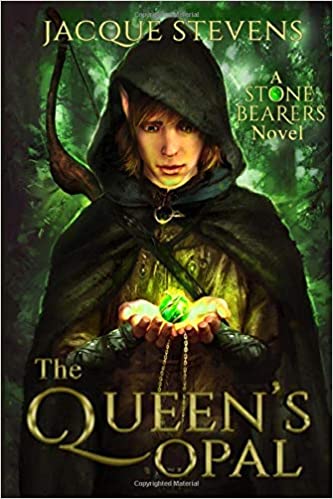 Drynn and Tavin are elven princes at a time in history when elves never left the forest, and hardly ever interacted with the other peoples of the land. But when their mother dies of an unknown disease, the two of them venture out into the human lands to try and find healers.

Unfortunately, they get separated, and Tavin, the warrior of the two, finds he has to become studious as he apprentices to a kindly human healer. Drynn, a gentler and more intellectual soul, is not so lucky, and is captured by a band of human thieves. He is beaten and chained as they try to take him to where he can be sold to an enclave of wizards.

Drynn has an artifact, an opal gem, that his mother gave him. It gives him visions that show him the history of the first elven Stone Bearer, his ancestor.

The Queen’s Opal is a beautiful character-driven fantasy story set in a wonderfully developed world. The constant clash of cultures between the isolated elves and the busy and often harsh and greedy humans adds to the drama, as Drynn and Tavin make one mistaken assumption after another.

It’s also great to see a story about brotherly love, and real friendship without the complications that ‘shipping and romance can bring.

It’s all tied up nicely in an ending that resolves the character growth, but also sets you up for the next step in the quest.

Jacque Stevens has handled the world building, the storytelling, and the wordcrafting all with skill.