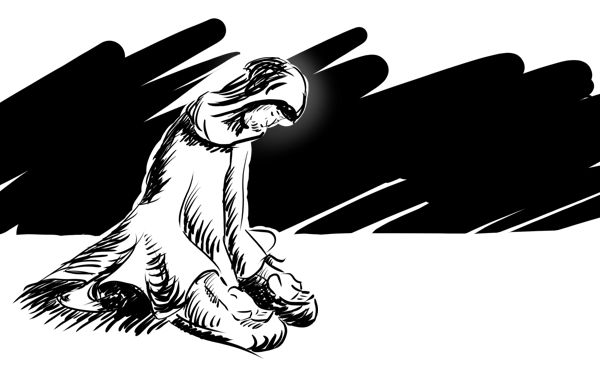 A Prayer of Strength

Kiffra felt his chest swell with the warmth of will, the fullness and completeness of his essence filling his core with energy, tranquility, and connection. His mind became alert and alive and his awareness flashed all around him, flowing through the shadows hidden behind the wall of the chapel’s courtyard, underneath the fallen stones near the broken gaps, on the far side of the pillars of the arcade, and even under the leafless and dormant scrub bushes that had overgrown the once beautifully manicured garden.

Shadows were always near him. Whenever there was light, there was shadow. Still, this time of the day, as the sun set past the buildings, those shadows got longer and deeper, and Kiffra savored them. In the shadows he found safety, peace, and connection, especially to the great Creator’s world that surrounded him.

That’s why he loved to pray as night fell. He knew that others feared the darkness, the unknown. Danger, fear, and evil hid in their shadows. Kiffra’s shadows, however, comforted him. He knew them well, and it gave him a little bit of joy to share that comfort with others.

The burning in his chest began to settle and ease away. It would be time to end his prayer soon, and then he would have to interact with others again, but for the moment he savored the warmth and the solitude. His knees hurt a little. Less so when he was actually kneeling, but he knew that when he stood, they would hurt more. That pain came with age.

He raised his head, his eyes still closed, and held his right palm forward in front of his upper right chest.

He moved it slightly lower, crossing it over to his left chest.

Finally, he moved it back to the right, slightly lower still, completing the gesture of faith taught by the Church of Three Lights.

Kiffra opened his eyes, and with a grunt and a groan leaned forward and shifted to stand. Just as he had expected, his knees, freed from the cramped position he preferred for prayer, complained as they flexed and raised him up. He stretched his arms. First out before him, then to his side. He stretched them behind him and stepped over to the dying embers of the fire.

“The fire needs more wood,” Kiffra said. He sat down on a stone beside the coals.

Kiffra looked up at him, a little confused. “There aren’t any more.” He picked up an empty metal cup. His hand dangled on his knee, holding it. He wore a black cloak. The tunic under it was also black. He felt an itch on his head and reached up to scratch it. He ran his hands through his graying black hair. He felt a tension tingle in his wrist. He felt those a lot. He flipped it away.

Tonklyn looked around himself, and around the fire. Kiffra nodded and asked, “Was someone going to go get some?”

Tonklyn shrugged. He pulled his cloak tighter around his shoulders.

“How should I know?” Tonklyn burst out, “Maybe they’re out looking for wood! Am I supposed to keep track of everyone?”

Kiffra sniffed. He held his hands out to the embers. He liked the inner warmth of his prayers more. The fire was nice, though.

The two of them sat in silence, staring into the gathering darkness. Neither of them noticed Shylai’a creep near until she sat on a stone on the other side of the embers. Kiffra glanced up. She wrapped a blanket tight around her shoulders. Her hair was messy and her face was thin and gaunt. She didn’t look heated or sweaty any more. Her eyes were a dark color. They didn’t look so… dead.

“Did you find him?” Kiffra asked.

Her head snapped up with a confused look on her face. “Find who?” she whispered. Her voice was still a bit raspy.

“When I helped you sneak into the palace last summer you were looking for your friend.”

Shylai’a nodded. She stared back at the embers in the fire circle. She seemed lost in thought for a moment. Was she confused? Kiffra wasn’t sure. Finally, she murmured, “Yeah. We did.”

Tonklyn looked up, his brows tense. “The palace? You were in the palace? Last summer? What were you doing in  the palace?” He glared at her. Shylai’a just shook her head and looked away. “When was that? Was it after the summerfest? After the dragons came? When I was king?” he pressed with an insistent tone. Kiffra saw Shylai’a flinch when he mentioned the dragons.

“Maybe,” Kiffra suggested, “she doesn’t want to talk about it.” He soothed his arm and elbow with his other hand. Tonklyn went quiet. He kept glaring at her.

Two others stepped over the tumbled stones that had fallen from the gap in the courtyard wall. Without speaking, they nodded greeting to Kiffra and Tonklyn. Kiffra nodded back. They walked toward a table beyond where Kiffra sat.

Kiffra turned to watch them. They took bread, cheese chunks, tubers, and apples out from under their cloaks. Kiffra jumped up. He stepped to help them with the food. One of them dropped a large dead bird on the table. He smiled. “We’ll eat well tonight!”

Tonklyn huffed. “That’s good! It took you all long enough!” He leaned back on his rock seat. “Where’s the lady? She should get to cooking this!”

Kiffra looked at the bird. It was a pheasant. “Where’d you get it?”

The man smiled again. “A rich nobleman dropped it as he was coming through the gate. I think he was from Northil or maybe Thornwell. Probably coming back from the hunt. I called out to him, and pointed to it lying there on the street. He looked at me, smiled, and rode on.”

“I wasn’t going to stand around asking questions. We were late enough as it is,” the other man added. “We just grabbed it and came home. Where’s Melyeah? She’ll want to get the stew started!”

Kiffra rubbed his arm. “She’s not back yet. And she’ll need more wood for cooking.”

The first man stepped over to the fire. “Yeah, I can see that. I’ll chop some up right away.” He noticed Shylai’a sitting by the fire. “Oh! Hello! You’re up quickly! Are you better now?”

She glanced up and nodded. The other man called out over his shoulder. “Ah, leave her be. Not every lost lass wants to be your wife.”

The man sighed and stepped under the broken roof of the old chapel. He picked up a rusty axe and swung it into a thick wooden beam. Some wood chips flew over his shoulder. “Well, maybe once she gets to know me, right?”

His friend laughed. “Even less so, then!”

Many times in past scenes, I’ve had characters ponder the existence and impact of the Creator. Some of the side characters, like the Collector or Brother Mathezar, testified of the Creator, most of the other characters, especially the main characters, are still wondering.

Antonerri was one exception, frequently kneeling in prayer. Prayer gave him strength both in the hour of his confusion locked under the tower, and while worrying about DeFrantis while healing in the chapel of Dirae.

Prayer has had a profound impact on my own life, and I wanted to have a character explore that as well. Kiffra will be a great example, in spite of, or perhaps because of, his quirks.