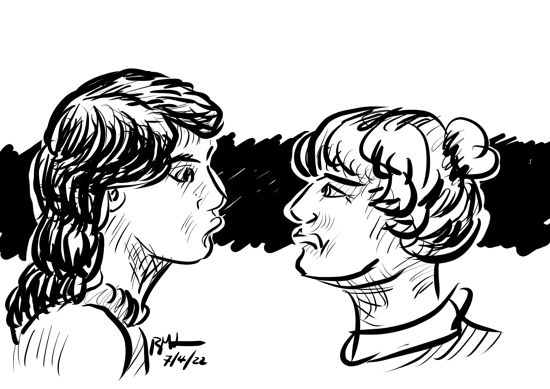 Afternoon brought more snow and found Mithrabella sitting by the window watching the flakes dancing as they fell into the narrow street. It wasn’t heavy, like it had been that morning, but the long storm had left the drifts almost up to the top of her high boots when she had gone out the back to fetch more wood for the fire. That had been several hours ago, and it continued to fall steadily since then.

In those few hours, she busied herself helping her mother clean, then put away the few Winterfest decorations that hadn’t been hung. After a small bit of bread and cheese for lunch, she sat down on a stool next to the window and watched the snow fall.

At first it had been peaceful, restful, to see the houses up the way all being covered by a blanket of white. It was a kind of great equalizer. Some of them were ruined, burned, and collapsed, and others stood steady, having taken the onslaught like stalwart sentries. Others were wounded, and being slowly repaired and rebuilt like the sick in a hospital. But all, regardless, were now quiet under a bed of snow.

After a while, her eyes refocused and she saw the reflection of her smooth round face and tiny nose in the glass of the window. Her deep blue eyes looked back at her with a stare of melancholy that belied her youthful visage. The sadness crept up on her all too frequently. It usually started as a tension, a desire to be doing something to fix the world, then shifted into the fear of soldiers or bandits and the need to protect her family and home. Finally, it ended with a sense of hopelessness and impotence. It took all of her efforts to keep her own life from collapsing into imagined ruin. She worried about her mother, her father, even about the books in the library. Were they safe? Were they burning? Was anyone keeping them ordered and shelved?

Motion in the reflection behind her shifted her gaze. Deera stood by the table, placing bread, cheese, bags of dry gruel and a corked bottle of milk onto a folded square of blanket. One at a time, she picked up each corner of the cloth and started tying up the bundle. Mithrabella’s eyes narrowed and her brows tensed. Her mother seemed to cope by trying to carry on as normally as possible, shopping, visiting friends, and helping the destitute. But that only amplified Mithrabella’s fears.

“Harva told me that her sister has taken ill. It’s a spirit that’s going around, I’ve heard. It’s been a bad winter for them so far.” She pulled the knot tight and picked it all up with both hands. “Would you get the door for me?”

“Are you crazy?” Mithrabella spat, standing and facing her mother. “Mom, you can’t go wandering in the streets! Especially carrying a big bundle of food! You’ll be beaten and robbed! It’ll be dark soon!”

“Nonsense. I’m only going two streets over.” Her mother started toward the door of the hovel. “Besides, there are soldiers in the streets. They’ll protect us.”

“The soldiers aren’t there to protect you! Don’t you get it? There’s a civil war brewing out there!” Mithrabella was shouting now. “Plus, it’s freezing and snowing outside! If you do manage to get there and back, you’ll end up sick!”

“No matter. I’ll be fine. Harva’s family needs help. Now get the door.”

“No! I’m not letting you out!” Mithrabella stepped between her mom and the door.

“Mithrabella!” Her mom set down the bundle and looked at her daughter sternly. “Ril? Can you talk to your daughter? At least come get the door for me!” Mithrabella’s father waved his hand from behind the back of his chair with a dismissive I’m-not-getting-involved shrug. Deera huffed and turned back to Mithrabella with a huff. “I am your mother. I cleaned your soiled swaddling clothes, and told you to pick up your toys. You don’t tell me what to do! I will do as I wish, and right now I wish to go help someone who needs it and will appreciate it. Now get out of my way!”

The two stared at each other with flushed cheeks and harsh eyes. Finally, Deera bent to pick up the bundle again and push past her daughter to the door.

Mithrabella turned around as her mother moved. “Fine! Wait a minute and I’ll get my cloak.”

Deera scowled. “Oh, don’t trouble yourself.” She opened the door with an irritated smile. “I’ll be fine. I left some dinner for you and your father. Put it together, will you?”

“Mom, please…” Mithrabella begged, but her mother nudged her aside. A freezing breeze blew snow in through the crack.

“Thank you, dear!” her mother emphasized. “And Harva thanks you, too. The Creator will bless you.”

“Fine. Sure.” Mithrabella threw her hands in the air and shrugged. “Bless your steps, mom.”

“I’ll be back before you know it.” Deera pushed into the snowbank that had built up in front of the door. Mithrabella watched her trudge up the street, feeling the cold wind slip through her flimsy housedress.

“Hey, it’s cold out there!” Her father coughed, “Close the door!”

In the New Testament, in the Bible, there’s the story of Martha and Mary. Jesus visits the home of these two sisters and there’s quite a bit of fuss over it. The short version of the story is that Martha ends up “cumbered about much serving” and asks Mary to help her in the kitchen.

I’ll let the article I linked to explain the story in more detail. It has links to the actual verses in Luke as well. This story has long been used to discuss the balance between kindness and practicality.

Here, Deera wants to go visit her friend. That’s clearly a kindness, a service. However, Mithrabella wants her to stay safe at home. Now, that protectiveness is also a kindness. It’s interesting, however, because the two acts of kindness conflict.

So, which one is right? Often in life we’re faced with the choice of good v evil, or the lesser of two evils. Here, it’s a choice between the better of two goods. Safety for your loved ones or support for your friends? Who is the right one, Martha or Mary?