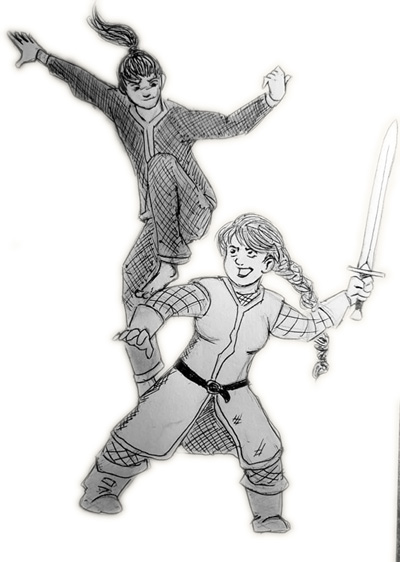 Korr tensed at the piercing sound.

She jumped out of the door to the small courtyard and in a few steps had Shylai’a’s extended sword arm in her hand. “What are you doing?” She shouted, holding the elbow back.

Shylai’a pulled at her, trying to shake her off. “Let go of me!”

Korr watched, surprised, and unsure how to respond.

“Get away!” Shylai’a grunted, then dipped, leaning her shoulder into Illariel’s chest. “Get off me!”

Illariel crumpled to the stones, gasping for breath. Korr hurried to her side and knelt, offering his hand. “Are you hurt?”

Korr stood and gestured an inquisitive finger at Shylai’a. She stood, leaning impatiently on one hip, her arms crossed with her short sword pointing up in the air from behind her left shoulder.

Korr extended his hand to Illariel. Her eyebrows twisted, squinting up at him in the afternoon sun. “But she was trying to stab you…”

Shylai’a rolled her eyes and gestured with her sword toward Korr. “Well,” she explained, “only because he asked me to.” Korr glanced at the sword tip pointing toward him. Shylai’a noticed it as well and dropped it to point at the stones instead.

Korr looked past her and saw movement in the darkness of the stables on the other side of the small courtyard. A set of many unblinking eyes appeared in the dark shadow of the open gate.

“All is well, Ari,” Korr said, then looked at Illariel and clarified, “Shylai’a has been kind enough to help me learn how to better defend myself against swords.” Illariel glanced between the two, then took Korr’s hand. As she stood, Korr added, “I did, in fact, ask her to try to stab me.”

“I’m sorry,” Illariel mumbled. “I, ah… I thought… I’ll just go over here and watch.” She sat down on a barrel next to some blooming lavender bushes, hugging her knees in front of her chest. Ari skittered out of the stable and tucked herself behind Illariel and the shrubs. Illariel reached back to scratch the spider’s head.

Korr nodded a quick bow to Illariel, then positioned himself opposite Shylai’a once again. He gave her a bow.

Let’s see. I was using a fire stance, wasn’t I? Should I go with the stone? Maybe storm. His feet on the floor shifted with each idea. He shifted back. No. Stone.

Shylai’a raised her sword before her and angled her far shoulder away from him. Since it was summer, and they were just sparring, she wore a simple linen tunic and leggings instead of her old gambeson armor. Her hair shimmered a bit in the sunlight, framing the shadows the sunlight was making on her cheeks. Focus, Korr. Anticipate and prepare.

She advanced. Korr quickly retreated, but not as much. As the range closed, she went into a lunge and thrust her sword at his chest.

Korr swept it aside with his forearm. He felt the flat of the cold steel on his skin and shifted his elbow to keep the edge from slicing him. She drew back and lunged again. This one, he swept to the right.

They locked eyes. He watched closely, seeing her eyes dart to his midriff, above his right hip. In a heartbeat, she lunged, but the attack went to his far shoulder instead. He had to drop and twist to avoid being skewered. Shylai’a jumped back and smiled.

Korr rolled off his back and stood. “Very good. You almost got me. Thank you. I must always be ready to shift my assumptions.” He grabbed a rag, wiped his face, and reset his stance.

Shylai’a heaved an exasperated sigh and dropped her sword arm. Korr stepped back out of his stance and picked up the rag again. “Eddiwarth?”

“Yeah.” Illariel continued, “He seems to be down. He was all excited to get to the city, and now that we’re here, he’s not doing much. I thought we were all going after the dagger knife thing.”

Korr wiped his neck and flexed his shoulders. “Parith is still engaged in trying to locate the dagger. This is proving to be more difficult now that the Dragon cultists have acquired it.”

“Does Eddiwarth even want it?” Shylai’a asked. “I mean, really?”

“He is worried about the ones he loves; Thissraelle and their giant friend.” Korr stepped forward again, with his hands resting on his hips. “He is unsure of his place, I think, and he wants to prove himself. I have felt this desire, myself, at times.”

Shylai’a gestured in wide circles with her sword and huffed. “He needs to stop pining for his girl and just get on with it,” she pronounced, waving her blade vaguely northward. Korr tilted his head back, a bit surprised, and she shrugged, “What? Yes, I said it! He needs to either go back to her wherever she is or get busy here.”

“I think,” Korr said, “that our friend’s feelings are a bit more complex than that.” He moved his feet back into the stone stance, planting them firmly. He dropped the rag and slowly swept his hands into place by his side.

“Complex?” She laughed. She readied her sword at her side. “Feelings? He just needs to get over it. Like we all do!”

She hopped forward in a sudden motion, swept her sword up over her head, and brought it down and across in a side slash. Korr immediately stepped in tight, making her eyes widen in surprise. His left hand caught her wrist, stopping the strike, and his right hip slipped under her extended arm. His right arm swept around her shoulder, tossing her over his leg and dropping her flat onto her back. A quick twist of the wrist and her sword clattered to the stone.

Korr looked down at her shocked expression and was suddenly struck by her eyes. Those eyes quickly narrowed into anger and she rolled away, snarling. He offered her his hand, but she slapped it aside and stood. She caught her breath for a moment, then snatched up her sword and stormed into the house.

Korr stepped after her, but paused and let her go. He looked at Illariel, who just stared at him with wide eyes and an open mouth.

The spider whistled and hissed.

In fact, that line is the hook of the chorus of a song I wrote about this very topic.

So, here, Korr and Shylai’a are sparring, but they’re having some troubles figuring out where each one is coming from. Are they just sparring, or are they fighting for real? Is there some chemistry there?