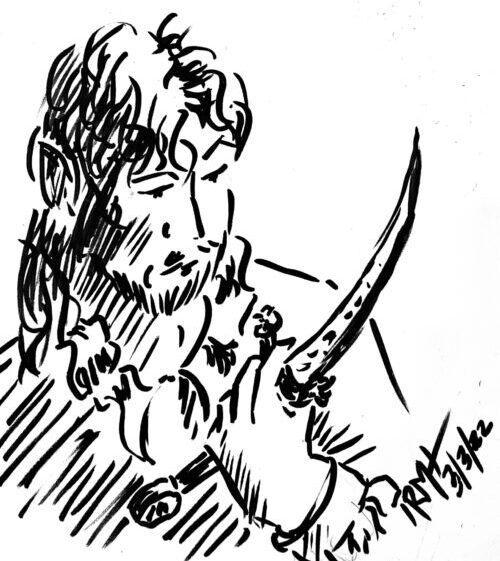 How to Be the King (Leadership)

Eddiwarth sat on the edge of the great central dais in the throne room, his flame and glow long since extinguished. It had been replaced by a strange feeling of completeness, a contentment built on a deep bedrock of sorrow and loss. Thick smoke hung loosely in the gloom in the now-silent rafters. The rain had stopped a long time ago, and a light glow was starting to rise in the eastern side of the palace, lightly illuminating the colors of the stained glass windows.

His face was sweaty and darkened by the smoke and the hours he had spent with Parith and a few of the remaining soldiers gathering up the bodies of the slain and carrying them to the courtyard below. Some of them had been particularly difficult to move. When they had found Korr’s remains, he had fallen to his knees and wept. Parith had tried to comfort him but was ultimately overcome and had to turn away from the body as well.

Soldiers had offered to wrap Korr up and carry him out, but Eddiwarth and Parith had insisted on doing it. After laying him gently on the courtyard grass next to all of the others, they had silently embraced before returning to the tasks inside.

The only sign of Shylai’a they had found was her sword stuck into the belly of a dragon. The dragon, surprisingly, was still alive, but badly wounded. Eddiwarth had insisted that he be healed, but Illariel’s will had been weakened from the battle. She had only been able to counter the spider venom and close his wounds, before leaving him to rest.

Two arachins had been killed, out of the half-dozen that had emerged from the depths of the city to answer Ari’s call for help. None of the men could move them, but the other spiders, now chattering with Ari and among themselves, were able to carry them out on slings of webs.

Now, Eddiwarth sat, motionless, emotionless on the dais. His head rested in his hands, his dusty hair draped over his face.

So much sorrow, so much blood. So little sensibility.

His arms and legs ached with exhaustion. Between the strain of his magics and the efforts of the cleanup, he had nothing left.

Eddiwarth heard the man’s word but just continued to stare at the floor before him, occasionally blinking.

“Sire?” he said again, a little louder. Eddiwarth lifted his head to look at the man. He was one of the soldiers who had stormed into the throne room and joined in the fight. Two of his cohort were there with him. They all stood with their heads bowed.

“What?” Eddiwarth wasn’t sure he’d heard them correctly.

The man who’d spoken raised his head a little. “Sire? The dragons are gone. Are you the king now?”

Eddiwarth’s eyebrows shot up and he laughed. The idea of being the king struck him as so absurd that he could not stop. The three men just looked at each other, uncomfortable. One man cleared his throat before speaking up. “Sire, we asked the other elf to tell us who was in charge, and he pointed to you.”

Eddiwarth, still smiling, called out, “Parith! What’s all this about?” He gestured to the men standing before him. “They tell me you have something to do with all this ‘Sire’ business!”

Parith weaved his way between the dragon bodies. “What, don’t you want to be king?” Parith said crossing his arms.

“Not me!” He put his arms out defensively.

The commotion caught the attention of other soldiers and they wandered over to the small group. They watched silently, unsure how to react.

“What about that guy from House Northil?” Eddiwarth asked. “Didn’t you say they helped you find me? Weren’t they supposed to be the good ones?” Parith nodded, bemused.

Another soldier stepped up to the group. He held the dragontooth dagger, crusted with purple blood, reverently in his hands. He offered it to Eddiwarth.

Eddiwarth raised his palms and shied away. “Oh, no. Too many people have died over that thing. I don’t want to be anywhere near it.”

“Taake itt.” A low and raspy voice behind him said. Everyone spun around or gaped up at the large dragon head above the conversation. The soldiers immediately drew their swords, and the one with the dagger took its hilt in a fighting grip. Eddiwarth jumped off the dais and backed away. The dragon was white with a sky blue belly and underneck and a spiky head and back. Its eyes drooped and it struggled to keep its head up. “Take thhe daagger.”

Some soldiers exchanged fearful glances, others cast the beast a distrustful glare. But the dragon made no motions to attack nor did he posture to defend himself. He rested on the dais on his belly, unable to support his weight. “Of alll the hhominids I’ve seeen,” The dragon hissed, resting his head on the stone, “and frrankly, all of the dragonss I know, you aalone are the most ssensible.” He pointed his nose at Eddiwarth, who raised a brow in response.

He continued, his tired eyes downcast, “You cann usse it on me iff you like. I deserrvve it. I’m olld and fooolish. I thoughht I would be aable to see the drragonkind returnn to their gllory.” He shook his head. “But yyou were riight. There wass no glory in thiss. Finissh me. Dragonss have no bussiness rulling anyone.”

Eddiwarth stepped closer and asked, “Who are you?”

The old dragon sighed, his voice low and rasping, “My namme is Ryxitt… The Wwise, of Graemmal.” He looked away, as if embarrassed to say his name.

“I’m Eddiwarth.” He dipped his head briefly in greeting.

Eddiwarth chortled at the name. Yeah. Eddiwarth Unburned. I’ll take that. He reached out and took the dagger from the soldier, then approached the dais. He raised the dagger and set it with a click onto the stone in front of the dragon. “It’s yours.”

Ryxitt raised his head feebly and tried to back away. “Nno. No, it belonggs with the hominidss, in casse another wyrm gets it into his idiotic hhead to conquer anythhing. Take it aaway fromm me, pleasse.”

Eddiwarth nodded and retrieved it, turning it in his hands. He lifted his head once more to face the dragon. “What will you do now?”

Ryxitt cracked an almost hopeful smile. “Wwell, If youu let me livve, and let me resst, I’lll probably go follow Xintalan baack to the lairs in Graemal. As soonn as I can ffly, that is.”

Eddiwarth nodded again. “Rest, then. That’s a good idea. Maybe we can find you some healers.” He turned around and surveyed the room again. “Then you can help us figure out what to do with all of them.” He gestured at the bodies of the slain dragons and drakes.

Eddiwarth shrugged. “I don’t know. Maybe outside with the arachins?”

Author’s Note: Be the King (Leadership)!

In Book 3, “Of Dragons and Kings”, Eddiwarth was the leader of the party. That was his role in the five-man-band, but he didn’t always act like he had the leadership role. He was often struggling with his own personal leadership, feeling that he was unable to make his own decisions, much less make them for others.

Still, he had his own leadership agenda, and when things came down in the end, and the dragons attacked, he showed remarkable leadership, taking charge where it was needed.

At the end, when all of the others that were claiming the crown had left or died, everyone looked to Eddiwarth for the leadership. His choice? To step aside. Is abdicating the leadership of Wynne a wise or poor choice? Only time will tell.