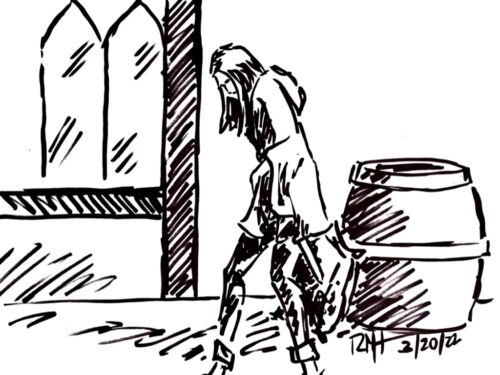 The Loneliest of Loneliness

Shylai’a lowered her head as she shuffled down the street.

It had been three days since she had awakened, bruised and caked in dragon’s blood. The moments after she had regained consciousness in the throne room that morning were hazy in her memory. Her head had hurt, and her heart was screaming in pain. It had taken a moment for her to remember why. People were running and the drakes and dragons were flying away out of a hole in the ceiling.

She had run away. Back to life on the streets. She could handle that. It had a strange sort of familiarity. Scrounging food, hiding from robbers. Except that before the city had some sort of order, some kind of stability. Now, everything was in disarray. So much of it, even entire neighborhoods, had burned or collapsed, and there were so many more people trying to find shelter and hope. There were also a lot of people wanting to take what they could get.

Mostly the others left her alone. Maybe it was the dark purple crust of dragon blood coating so much of her tunic and leggings. Maybe it was the look of utter dejection in her eyes that gave others the feeling that she had nothing to lose by fighting. Whatever it was, the thieves and rogues stayed away.

She had thought about rinsing herself off in the river or stealing new clothes, but she couldn’t bring herself to take her tunic off. It was as if she had been baptized in fire and blood, and now the linen was sacred.

She wasn’t certain if they had been friends. She had been with them only for a few weeks, and they had treated her well enough. They had fought side by side and Eddiwarth had welcomed her into his home and family. Illariel was cute but annoying. Parith was just annoying.  They had tried to find the dagger and defend the innocent. That had felt right. Being with a team like that had felt, well, strangely right. Still, in the end… In the end… A lot of people had died.

One person, in particular, had died.

She staggered as her breath left her. She stopped walking and leaned her back against the side of an inn. She ran her hand through her scraggly hair, and her face twisted into a grimace as the image played in her mind again; Korr in his stone stance next to her, ready to fight; Korr standing over her, throwing a glowing bolt of force at the dragon that was about to flame her; Korr in the other dragon’s mouth, flames exploding around him.

Korr lying on the floor, broken and burning.

He had been a friend. He had been the closest thing to a friend she had ever had. He’d had a way of getting into her heart and her mind and saying just what had needed to be said. In just a few short summer weeks, he had chipped a gap in her walls.

The Creator hates me. He sends me the one person that likes me and trusts me, and then snatches him away!

She turned around and pounded her fists into the stucco walls, sobs wracking her shoulders and echoing down the empty alley. She slid down to her knees, then sat on the cobblestones, hunched over with arms wrapped around her middle. She gasped and choked on her tears, feeling as if she had been punched and kicked all over again.

I’ll just lie here. Curl up and die. Maybe that stupid madman can come and wave his hand and send me away.

He’s never around when you need him.

In my mind, the deepest kind of loneliness is when you feel unconnected to God. Yes, I’m a believer, and yet there have been times when I have been mad at my creator. And that is a loneliness that hits your heart. When you feel like you’ve been abandoned by God.

In retrospect, however, I also know that He didn’t abandon me. And, He was patiently waiting for me when I was ready to come out of the grieving on the other side. It took a long time, but I reconnected, and my loneliness faded.

Stay tuned. Shylai’a is gonna have a lot to go through in Book 4.