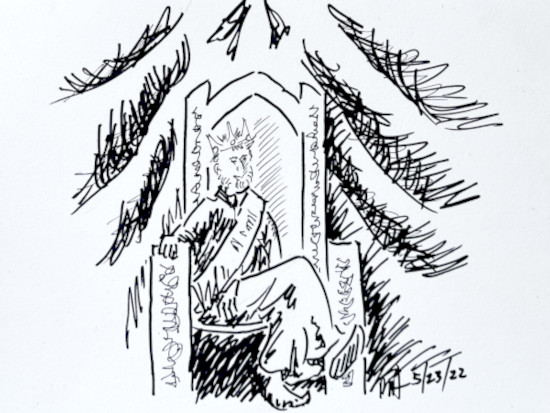 The Monarchy is Lost

I am the King!

Tonklyn smiled as he settled the cool metal of the crown onto his hair, then lowered his hands. The bejeweled fingers curled onto armrests of marble carved in the shape of dragon’s heads. His forearms and elbows sat on plush pads of purple velvet.  His crossed knees were covered in regal robes of fine silk trimmed with gold threads. He slid his palm over the deliciously smooth fabric covering his leg.

It’s good to be the King again.

He stretched his shoulders and leaned back in the throne, settling his head into the velvet padding behind him. He felt the back of the crown shift against the padding of the chair. He’d have to have that adjusted. All around his royal dais hung thick lush drapery, a deep red, like the curtain of a stage. He knew that just beyond that curtain awaited his loyal and praising subjects, eager to see his face and hear his just and benevolent pronouncements.

Surely there is no kingdom in this world as prosperous or happy as my Wynne!

The sounds of muffled shouts floated through the curtains. Tonklyn reached up and repositioned the crown. It fit him perfectly, comfortably, like he had worn it all his life. He squared his shoulders and set an expression of regal importance and waved his hand to an unseen servant.

Instantly, the curtain crumpled to the floor around him. He closed his eyes and held out his hands to greet his adoring subjects. Roaring cheers greeted him with the warmth of the bright summer sun.

All kneel now to revere Your Majesty…

He opened his eyes and stood to acknowledge the throng, but the shouts of delight and rumble of the crowd were actually the roar of dragons and the terrified screams of fleeing peasantry. The warm glow of the sun at midday was replaced by the flames of burning homes and shops, ignited by the retch spewing from the dragons swooping low over the city.

He was suddenly not in his palace, not even in his throne room. This was not a balcony or a terrace overlooking a cheering parade. This was not even Centertowne. His throne sat in the middle of a plaza in the Innerwall, on a cobblestone square. All around him people screamed and ran. Carts and tents belonging to the vendors of the market lay strewn across the way, many of them burning.

The people ran past his throne trying vainly to escape the dragons and the flames, only to be met by soldiers with swords herding them into cages on wagons to be hauled away by anxious horses and drivers. As smaller drakes swarmed past they attacked any they saw, soldiers or civilians, making the animals bolt and run, dragging the prison wagons over fallen innocents.

Tonklyn rushed forward waving his arms. Wait! Stop! I am your King! I command it!

A lady rushed past him, pushing him aside, as she tried to shake away a flying drake. Tonklyn struggled to keep his balance as a soldier fell into him from his right. The two toppled to the cobblestone, the soldier landing on top of him with a grunt.

Pain shot through Tonklyn’s shoulder. He tried to shift to get the soldier off of him. As he struggled, the soreness spread through his back and hips. The heat of the burning plaza shifted as winds rushed over him with freezing drafts of air. Shouts and screaming filled his ears.

I’m cold! Tonklyn shivered and opened his eyes. He rolled over in the shadows of a dreary overcast morning. The throne was gone. The crown and his royal robes were gone, replaced by his cloak and old, filthy ministerial robes. He lay in a narrow space, an alley. The pallid walls of two buildings to either side created a hollow, funneling the cold winter wind over him. He blinked twice trying to clear his waking head. A cluster of falling feet and running legs drummed all around him, past him. Shouts followed them echoing away in the alley. More shouts rang out from the opposite direction, toward the glowing opening between the two buildings where Tonklyn had hid that night.

Muscles aching from the discomfort of sleeping once again on cold stone, he dragged himself to his feet and pulled his thick dark cloak more tightly around him. He wiped his hand across his face and hair then pulled the hood up over his head. With a slowness that comes from pain, he stumbled to the gap to see what was causing the ruckus.

The alley opened up into a large cobblestone plaza filled with the chaos of battle. Soldiers with spears and citizens with swords were clashing in all parts of the square. Tonklyn immediately ducked back into the shadows of the alley, pulling his hood as low as he could. Still, he inched forward, trying to assess what was happening and who it was happening to.

He saw two small clusters of soldiers in separate corners of the square. The old House Thornwell, I’d guess, judging by the livery! They were being harried by ununiformed assailants with swords. Those aren’t ordinary citizens, though. Those swords are too nice to be peasants. Maybe they’re a private militia. Tonklyn could see lots of bloody soldiers laying across the stones in the plaza. Many of them were showing arrows protruding from their backs. There must be archers on the roofs. Looks like the soldiers haven’t fared so well in this battle, after all.

Shouting and the clash of weapons filled the space with echoed noise. On the other side of the plaza, the militia fighters were struggling with others wearing ordinary clothing. These were fighting with poles, knives, an occasional sword, or whatever they could get their hands on.

Tonklyn stepped back into the alley a bit, uncertain. He wanted to see, to learn what was happening, but he was also afraid of being captured. I would be quite the prize for this battle, wouldn’t I? To capture the King! I’d fetch a handsome ransom! He smiled at his own joke.

A loud crack and a flash of light split the chaos. Tonklyn jolted and looked out from behind a wall. Several of the militia fighters were now laying on the ground and others were scrambling away from the citizens. One of them stepped forward, pointed his hand and, with another loud blast, shot a bolt of light at another of the fleeing fighters. It struck him hard in the back, tossing him onto some low shrubs a dozen feet away. He lay motionless on the bushes.

The people around the mage shouted and ran, more terrified of the one who had just saved them than they were of the ones who had been attacking and killing them moments before. Before the young mage could react, the air whistled and two arrows sank into his chest, dropping him to the ground with a thud.

Tonklyn’s eyes widened with surprise, then he noticed several people running toward him as they tried to escape the scene. Some were the militia, others had just been fighting them, but they all had faces of fear.

Tonklyn turned, and despite his soreness, quickly slid deeper into the alley ahead of the onslaught.

Before he had taken more than a dozen steps, a hand grabbed his arm and yanked him down. Tonklyn fell to his knees. “Let me go!”

“Shh sh!” a voice hissed as the hand pulled him behind some barrels. “Keep ya head down! Do ya wanna get killed?”

Twynne Rivers, like any medieval state, is a monarchy. Or, better said, was a monarchy. Now, it’s in anarchy. Each form of government has its degenerate form. Democracy degenerates into tyranny, monarchy into anarchy, etc…

In the case of Twynne Rivers, once House Twynnham was ousted, and the subsequent two monarchs driven away, there was no one in place to rule. Much of book 4 will be dedicated to the process of re-establishing the monarchy in the land, and it ain’ gon’ be pretty. It rarely is in real life, either.

Even a monarchy, though, in the long run, has to have the support, or at least the acquiescence of the people being ruled. As I’ve been plotting out the rest of the story, it’s interesting to me to see how it develops. The monarchy will be restored, but you’ll have to read to find out how!