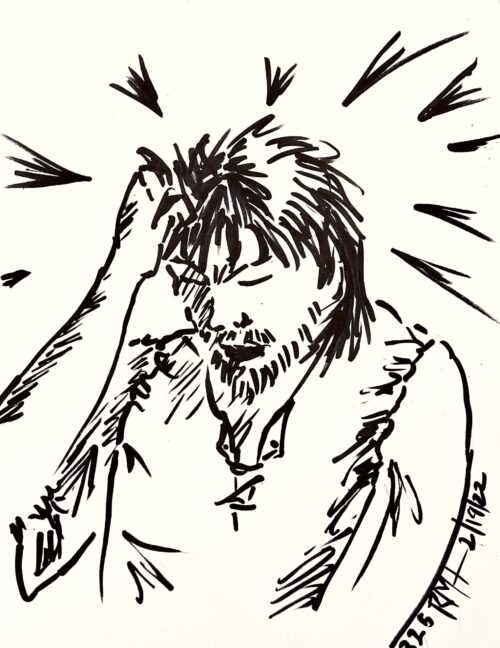 Eddiwarth pushed himself with his legs, so he sat taller against the dais. He gripped his left arm tight against his body with his right to keep it as steady as possible. Every motion of his body, every shake of the floor sent shivers of pain through him, radiating from the shoulder.

Wincing, he looked up at the chaos swirling around him. What is going on? I was trying to stop this! Dragons roared and bit, swords clashed, and drakes flew by, screeching. Flames licked up from burning pools on the floor, and the rain continued to fall with the cool wind through the holes in the ceiling.

“You’re hurt!” the voice of a young girl cut through the din.

Eddiwarth looked at the sound, but sweat dripping from his brow made his vision blurry. He blinked a few more times and recognized Illariel kneeling next to him. She was reaching across his chest to tenderly touch his shoulder. His eyes followed her hand. His shoulder didn’t look like it was supposed to. It wasn’t sitting at the proper angle. When she touched his arm, he hissed and grit his teeth.

“Sorry!” She jerked back. “You’re really hurt bad!” She jumped up and crossed in front of him. Ari jumped down next to her. Eddiwarth looked them both over. Something was wrong with Ari.

“Aah!” He winced again. “No. Don’t worry about me. There are others that need your healing much more.”

“I’m here, so don’t bother sending me away. Parith said to find you and bring you back. We’ve got to get out of here, but we’re not leaving without you.”

“But there’s so much killing going on.”

“Exactly! That’s why we’re getting you out of here!” She put her hands on Eddiwarth’s chest and closed her eyes to concentrate.

Another terrible roar shook the chamber. They both looked up to see a dragon raise its head high with a body in its teeth. Eddiwarth’s eyes widened in horror as he recognized the face of the man.

The dragon belched out a spray of flaming spit completely engulfing Korr, spewing out the sides of the dragon’s mouth, through the air, and splattering onto the floor.

“Korr!” Eddiwarth shouted again, struggling to stand. He pushed with his legs against the dais and, through gritted teeth, worked his way to his feet. This has to stop! Illariel didn’t even try to stop him, too stunned by what she’d seen.

Eddiwarth choked and his eyes blurred again, as tears flooded over and ran down his sweaty face. He lurched forward.

“Don’t move!” Illariel tried to hold him down, but he stumbled out of her reach.

Another cry cut through the chaos, along with more roaring and howling. Eddiwarth tried to wipe his eyes on his good shoulder, but even that hurt too much. Still, it helped clear his vision. Shylai’a was shrieking and running from dragon to dragon, stabbing and slashing with a dagger. With the dagger!

Eddiwarth stopped and stood, holding his arm, his chest shaking from sobs. He raised his head up and said, “Stop.”

The killing went on. Hominids, arachins, drakes, and dragons went on running, shouting, screaming, fighting, killing, and dying. And Eddiwarth had seen enough. “Stop!” he called out again, louder.

They won’t stop. They can’t stop. I have to stop them.

What can I do? If I can get into their heads, maybe I can get them to stop, and then I’ll tell them to sit down.

We’ll all sit down.

He felt his will swelling up inside him. I’ll need it all. Not for flames this time. This one is from my mind to their minds.

He took another step, feeling his will growing. He started to feel a bright sort of elated dizziness, and a blue haze started to gather around him, swirling up from his body and floating around his head.

His ears rang with energy, his head felt light and strong. He took a deep breath.

The blue mist rushed out from him, washing across the chamber, flowing past everyone and everything in it, like a wave made by a rock falling into a still lake. The moment anyone or any beast was touched by the wave they staggered back, stunned into silence.

Dragons were hushed, humans fell away, arachins jumped aside, and nobody spoke. They all just turned and looked at the lone elf standing in the middle of the hall, holding his arm and crying. The only sounds were the rain, the distant thunder, and the crackling of flames.

Eddiwarth looked up into the eyes of the dragons and nodded to them, with a sad kind of smile. They looked down at him as if they couldn’t figure him out. The one with the crown seemed particularly confused. The white and blue was badly wounded and struggled to stand up.

“Illariel,” Eddiwarth said, “I think he needs help.” He gestured at the weak one. He looked at the ruby gem in his hand, then slowly held it up to show it to the great dragon wearing the crown.

The dragon king shook his head and snarled, fixing his gaze on Eddiwarth. A drake squawked, and then another shrieked. A general rustle swept across the room and the combatants suddenly shifted their weapons and dropped back into battle stances.

The great dragon glanced down at the floor at Eddiwarth’s feet. He jerked his head back and shrieked out a roar. Two other dragons joined in the roar, churning up their stomachs.

Eddiwarth’s eyes widened as he recognized the voice calling to him. That’s her! That’s her voice! Where is she?

Eddiwarth looked away from the dragon’s face and saw Thissraelle floating in the air, gesturing to him. His heart leaped and he smiled. She’s here! She’s coming back for me! That’s all that matters!

Then the dragons belched fire and fury down over him.

Blessed is the peacemaker…

Up to this point, Eddiwarth hasn’t really been a peacemaker. He’s not much of a fighter, either, really. Mostly he just ends up captured or in trouble.

Here, Eddiwarth is not so much an idealist as he is just worn out and tired of everyone killing each other. In a lot of ways, he’s mirroring Heathrax’s opinion, but he’s doing it from the middle of the fight instead of the sidelines.