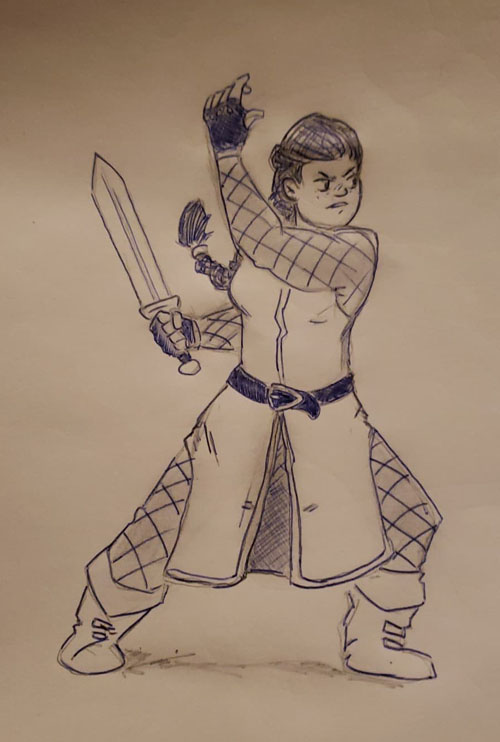 Thissraelle has begun her magical training with Heathrax and in the process learns about Wynne’s creation story. In the tale, The Creator formed powerful dragons from each of the magical essences in The Vast, who then helped Him form the world. Thissraelle learns how these essences shape and control the magics she’s learning and practicing.

After the defeat on the bridge by the shrine, Kirraxal had sent the undying dragonbonded soldier to Emberfire City, the capital of the high elves. Tonklyn meets him there where they search for a way to contact the dragons living there. They meet with some dragonriders and learn that the dragons of the high elves are subdued and trained like horses. Tonklyn promises one of them to be set free.

Eddiwarth and Parith are also in Emberfire City, and they talk about their adventures. Parith wonders about the Dragon’s Tooth dagger that Granthurg currently carries. Eddiwarth is troubled by scenes from his past. He had burned his home trying to create magical flames. He also senses that Jaxil, Thissraelle’s father, does not like that he and his daughter are romantically involved. At a Winterfest celebration, Korr, Parith, and Karendle notice that those in high elven society do not welcome them, either.

A young and energetic wood elf girl, Illariel, is exploring Umbrawood Forest and finds a young arachin, one of the race of sentient spiders. It has been wounded by a patrol of invading high elves. She heals it, and it shows her the rest of its family who were killed by the patrol. Sadly, Illariel can’t heal them. Illariel must return to her village and warn her people.

Shylai’a is an angry young sword fighter, homeless in Twynne Rivers. She’s been told she can’t join the City Guard because she’s a girl. A strange old wizard helps her get across the river so she can shelter the night with her bond of beggars in an old chapel. The next day, a charitable group celebrating Winterfest brings food and music to the beggars. Then, the captain of a noble’s militia enters the celebration and chooses the stronger individuals, pressing them into service. Shylai’a is upset by their duplicity, but joins nonetheless.

A steady cascade of snow tumbled down across Shylai’s face. The wind whipped through her hair and stung her ears with vicious cold. It made her gasp.

She had to hustle to keep up with the other men in her raiding party. They were much taller, even though the group, like Shylai’a, was mostly human. The shin-deep snow in the street made it even more difficult for her. The heavy padded gambeson armor she wore kept her warmer than her cloak used to, and her leggings and heavy leather boots kept her toes from freezing. Both bore the mark of the maple leaf, the crest of the Marquess.

The sun had gone down about an hour before. The streets were dimly lit, mostly from the glow shining through windows, but also from the swinging lantern of their leader walking before them. Being in the militia had finally gotten her out of the Outerwall, and into the city proper. Here, the buildings were much nicer and much more stable, not like the shaky shanties in the poverty outside the wall. Most of these were one or two story structures, with white wattle and daub walls in between beams and bearers of heavy wood.

The lantern light jumped up above their heads and swung side to side, a signal to stop. She did, and glanced at the leader. He was a tall man with a full dark beard. His armor had a few slats of metal on his shoulder and links of chainmail covering his chest, over his gambeson.

“The Boar’s Head men are all living in a residence around the corner, behind that inn.” He spoke so that all could hear, but tried not to shout. “We’ll be going in like we did two days ago. Borga will be the rock. Till will be the right blade, and Shorts,” He gestured at Shylai’a, “You’ll be the left.”

Shylai’a didn’t like that everyone else was called by their names, but their captain always called her ‘Shorts’. She drew her sword and hefted it, readying it for the rush. She tightened the small bracer shield strapped to her left arm. For now, she would take her anger out on the enemy.

“It’s likely that there will be resistance, and they might even have heard we’re coming. They might think that the storm stalled us, so we might still catch them in surprise. Shorts!” He paused, looking her over.

It was difficult for her to see his face behind the lantern, but she knew that she hated it. “Yes, sir!”

“Make sure that you work with the points this time. Don’t get in their way.”

She gritted her teeth. Maybe they should keep their spears out of my way! “Yes, sir,” she whispered.

The captain stepped aside. “Move! Everyone Move!”

Borga, a large muscular man, hefted his two warhammers and took off as quickly as he could in the snow. Shylai’a and Till, a slender man, took off behind him. As they ran past the captain with the lantern, she could hear the sounds of swords being drawn and feet shuffling.

Borga rounded the corner and crossed the street, heading straight toward a wide door between two bright windows. It was sheltered from the snow by an overhanging second story. Borga leapt up the few short stone steps before it and slammed his shoulder into the door. It banged loud, but did not fully give. Shylai’a could tell by the groaning it made after the hit that it was weakened. Shouts immediately erupted from inside. She smiled. This was going to be a good fight.

The second hit broke through and Borga stumbled in with a grunt. Shylai’a shouted and rushed in behind him, to the left, and Till followed on the other side. Two men in rough tunics jumped up from the small wooden table in front of them, short swords drawn. Are they of the Boar’s Head Rebellion? Either way, they’re drawing swords… The nearest one called out and took a large step to swing at her. Their swords clinked as she easily parried him off to the side.

“What are you doing up so late, little girl?”

“Arresting you, apparently,” she snarled. She shifted further to the left to keep away from the second man coming around the table. She leaned low and thrust up toward her attacker’s chest.

Where’s my point man? He should be sticking his spear in the other guy’s face about now. Borga engaged someone in the middle of the room and was pressing him toward the far wall with a fury of hammer strikes. Shouts rang out from across the room. A woman was screaming in fear, and her voice vanished down a stairway. Shylai’a jerked her attention back to her assailants as the second man jumped in to take a swing at her. It caught her hard on her shoulder, and she felt the hurt of the blow, but the blade didn’t cut through the gambeson. Aw, that’s gonna bruise! She swung and slashed across his gut with the tip of her blade. He screamed and backed away.

She saw the flash of the blade of the closer attacker as it drove toward her head. She ducked and swung her bracered forearm. It deflected the sword away with a clank. She slashed a counterattack, but the man jumped back, scowling.

Shylai’a glanced at the far end of the room over her assailant’s shoulder. A slender elf with a frightened look on his face stood up and waved his arms in the air. Someone showed out a warning, “Wizardry! Seize him!”

As soldiers turned toward him, the elf pointed a sharp finger at Shylai’a. Instantly, a surge of magical energy flashed through the air and slammed into her chest, tossing her back against the wall. She crumbled to the floor and big chunks of plaster and daub cracked from the wall, tumbling down onto her.

What was… Where’s my sword… She tried to stand but couldn’t move. I… Gotta stand… up. Her head dropped back and hit the floor.