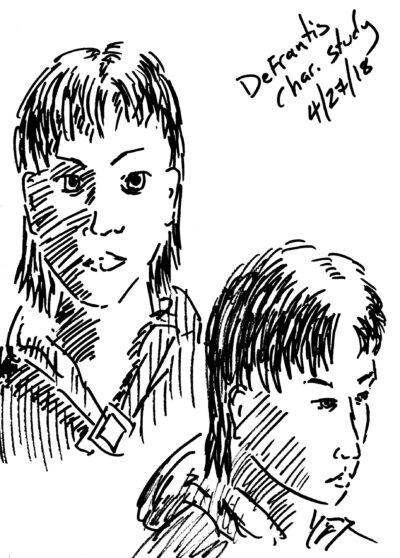 Story 1 – Getting It All Together

DeFrantis, a rogue with shadow magical powers, lives in Wynne, on the streets of the sprawling city of Twynne Rivers. She’s kind-hearted, and a little bit timid, but she’s also learned a few tricks along the way, like how to use shadow powers to hide in the alleys at night. She really cares about all the children that have gathered around her and her friends, and she helps the whole group survive.

One rainy night she tries to steal some chickens for everyone, but is surprised by the innkeeper. She tries to use her magic to sneak away, but she is caught, then arrested by the city guard. While locked in a cell under the guard tower, she meets Antonerri, another prisoner who has been charged with heresy. Their cells are dark and the air is thick with the smoke of burning mage’s bane, an herb that suppresses magical powers.

Antonerri’s dream had always been to become a knight for the Church of Three Lights. One day, as a soldier in the Church Guard, he had been ordered to punish a peasant who wouldn’t pay his tithes. When he refused, he was beaten, arrested, and thrown in a cell in the guard tower.

While in jail, a priest of the church attempts to torture a confession from DeFrantis, but Antonerri takes the brunt of the punishment instead. When she steals the key from the jailer, she shows it to Antonerri, and they plan an escape.

In another part of the city, Thissraelle, a naive young high elven girl, daughter of the master of the city’s Wizard’s Guild, decides she wants to escape her life and explore the city. Intending to magically fly from her tower in the guild hall, she finds a magical trap her father had set (he’d used a magical gem called an ‘oculus’) to keep her in her room. She uses her magic to temporarily diffuse it and flies away into the rainy night.

Granthurg and his boss, Rinkmorr, are giants that had been driving a cargo barge up and down the Wynne Rivers together for several years. A few nights before, as they had approached the city of Twynne Rivers, a pair of river pirates had attacked them. Granthurg had been hurt, but the thieves were repelled. Rinkmorr had healed Granthurg as they continued on to the city.

The next morning Thissraelle is attacked by ruffians on a street on the RiverFront and has to use her light and mental powers to defend herself. Granthurg sees her struggling, helps her with his warhammer, and they quickly become friends. Thissraelle is surprised to find that Granthurg is very studious and loves history and collecting maps .

Karendle is a half-dwarven girl with a bit of a bad attitude. She is in Twynne Rivers for the first time and desperately wants to become a wizard. Unfortunately, the Wizard’s Guild had refused to allow her admittance. She had caused a scene in front of the guild hall, and was forced to leave.

That evening, while she is trying to find lodging, she is approached by two men who hire her to capture wizards (there is a growing distrust of wizards and mages in Twynne Rivers). They show her how she can use oculus gems to use magic and to trap people inside them. She immediately remembers hearing of a shadow mage who had attempted to rob some chickens the night before, and decides to go after her first.

That night, Thissraelle’s father sends Eddiwarth and another young student wizard to try to bring Thissraelle home. Eddiwarth is a playful, energetic man, a half-elf, and has a hard time taking anything seriously. He doesn’t know Thissraelle, but he sees this assignment as a chance for adventure.

Also that night, DeFrantis and Antonerri escape, but are chased by Karendle, who uses her oculus to throw a magical blast at them.

The next day, DeFrantis finds that the children she had been sheltering have been sold off into slavery while she was gone. She is frantic, and swears that she must find them. She and Antonerri book passage on Granthurg’s barge to go upriver to look for them, meeting Thissraelle, who also wants to travel west to get to the Emberfire Mountains.

Rinkmorr tells Granthurg that there is something on the boat that some of his enemies want. Rinkmorr tells Granthurg that he needs to sail the barge along the northern branch of theWynn River and wait for him to catch up. Some ruffians attack the boat to get this item at the same time that Eddiwarth and his companion attempt to capture Thissraelle. Granthurg, Thissraelle, DeFrantis, and Antonerri all fight to defend themselves. Karendle surprises them all by joining in, capturing Eddiwarth by entrapping him in one of the oculi. They all float the barge west, upriver, to escape.

Meanwhile, hidden in the western mountains, Kirraxal rests. He is a dark dragon with shadow powers, and wants to restore the ancient reign of the Dragon Kings. He tells his servant, A conniving young human named Tonklyn, to bring him food, and he’s tired of old cattle. He asks to be fed human children.