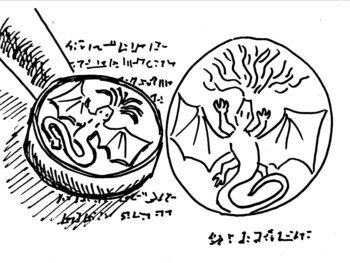 The heroes’ party docks in the small river port village of Dirae, west of the big city. Karendle decides to take her oculus stone with the captured wizard back to Twynne Rivers for payment. She’s told to stay and capture Thissraelle as well.  Then she is surprised when a thief attacks her and takes the pouch with her oculi gems. She pursues her attacker, but loses him.

At an inn, over breakfast, the rest of the group decides to help DeFrantis find her kids. They split up and begin looking for the slavers’ dark market. DeFrantis and Antonerri get into the market in the guise of slave sellers, while Granthurg and Thissraelle creep up outside of the market. Granthurg is attacked by someone else looking for Rinkmorr’s item.

Unknown to any of the others, Karendle is there, also, having followed the thief. Once inside, She attacks the thief, throwing a fireball at him, and the market erupts in chaos. Karendle is wounded, and DeFrantis heals her. Antonerri is separated from DeFrantis, and, in trying to find her, saves a few slave children with some help from Granthurg and Thissraelle. DeFrantis and Karendle are captured by the slavers and taken away.

Granthurg and Thissraelle find what Rinkmorr had hidden on the barge. It’s a strange carved dagger with a sharp white blade. On the pommel it has a symbol of a dragon breathing fire. Neither of them know what it is, or why Rinkmorr wanted to keep it a secret.

The kids that Antonerri rescued are not the ones DeFrantis was looking for. However, now the group has to rescue her and Karendle as well. The two captured ladies are unable to use magic because their captors use mage’s bane  again. They argue at first, and soon realize they need to work together to escape. When DeFrantis had healed Karendle before being captured, she had snatched up the oculus pouch. Now, they use the oculus to contact Thissraelle.

Thissraelle is excited and tells Granthurg that she’s received a message. He uses his research and his skill with maps to know that the two ladies are being held in an old manor house by a cult known as The Dragons Flame. Thissraelle, Grathurg, and Antonerri set off into the Umbrawood forest to find DeFrantis and Karendle.

While held by the Dragon’s Flame slavers in the abandoned manor house, DeFrantis and Karendle release Eddiwarth from the oculus, and tell him how to help them break free. With newfound confidence, they find the DeFrantis’ children and begin to fight for their freedom. They manage to kill a few of the slavers soldiers but their opponents are tough. In the process the house catches on fire, and it looks like the party is losing the fight.

At that moment, Thissraelle opens a portal into the manor, and Granthurg and Antonerri step in and begin fighting as well. Thissraelle joins them, healing the wounded. Antonerri finds the power of his light and they defeat the slavers.

They return with the children and establish an orphanage at the abbey near Dirae. At the summerfest, DeFrantis and Antonerri finally declare their love for each other.