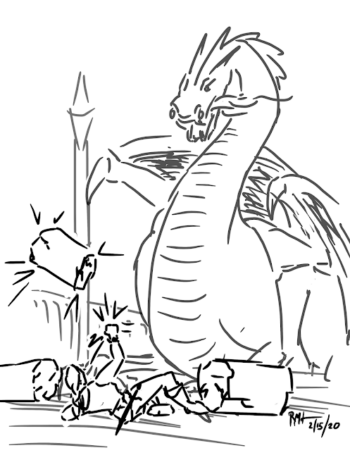 Story 4 – The Dragons of Emberfire

Thissraelle awakens in a place that is strange, but familiar. It’s The Vast, an odd and deep void of extra-dimensional space where occasional islands of rock and matter float and spin through emptiness and clouds of colorful magical energies. The particular rock where she and her friends are resting holds a temple and an outpost of the Seekers of the Great Reality. They are a secret group of wizards that are committed to searching The Vast, and the worlds dimensionally connected to it, to find The Creator.

Thissraelle had visited The Vast as a child with her father and is thrilled to see it again. She is also excited to see her friends, Karndle and Eddiwarth, in the temple with her. She takes some time to reconcile and bond with Karendle, as well as become more acquainted with Korr and Parith, who fought by her side in the cathedral in Twynne Rivers. She also tries to magically reach out to Granthurg’s mind, but can’t find him.

She discovers that Korr is also trying to find Heathrax, though neither of them really knows why. The Seekers tell them that he is believed to be living in the Emberfire Mountains. Eventually, they all decide to return to Twynne Rivers and journey north, through the deep of the Umbrawood forest to search for him.

After the cathedral attack, Tonklyn returns to the mountain hold of Kirraxal, the dragon. There, he discovers a magical key to the great hidden treasure horde of the ancient dragon kings. Included in this incredible wealth is the ancient’s crown, which Kirraxal puts on, proclaiming himself the rightful heir of the Dragon Throne.

Granthurg sails his newly-acquired barge west up the southern Wynne river toward his hometown in the Graemal Mountains. He has many questions, especially about the white-bladed dagger he holds. Why does everyone want it, and why are they willing to kill for it? He writes a letter to his friends DeFrantis and Antonerri in Dirae, telling them what happened in Twynne Rivers and sharing his fear for Thissraelle.

Finally, Thissraelle’s new team steps out of a dimensional portal back into Twynne Rivers, in “The Great Reality”. They are shocked to find that the land had moved on into late fall, nearing winter, while they spent what seemed like only a few days in the Vast. She sees the ruined cathedral and the now-empty hall of the Wizard’s Guild and wonders what has happened to Granthurg and how her father could have possibly commanded the attack on the Church. They are met in the street by a strange old man and guided to those who can help them in their journey.

As the part opens, Karendle is contacted via oculus by Illitharin, her main contact in the Dragon’s Flame. Thissraelle joins in the communication. They still want Karendle to capture Thissraelle, and she assures them that she will. Later, Karendle and Thissraelle also contact DeFrantis and have a joyful reunion, even though it’s through magic. They learn that Granthurg is alive, though fearful.

As they travel north out of Twynne Rivers, toward the Umbrawood Forest, Thissraelle reveals her fear of the wood elves, offending Parith. Parith also discovers Eddiwarth’s feelings for her and teases him about it.

Kirraxal figures out some of the magical glyphs of the Dragonkin and kills three of his servants. He uses dark shadow magic to restore them as the Dragonbonded, semi-living servants. One he sends to find and destroy Heathrax, one he sends to recover the white dagger, and one he keeps close as a very loyal guard. Tonklyn worries that his position of trust with Kirraxal may be on shaky ground.

The party reaches the Umbrawood Forest and enters, traveling several days into its dormant autumn depths. Illitharin passes them on the road and acknowledges Karendle with a knowing look. The next morning, the party is attacked and overcome by a patrol of wood elves. They try to capture Thissraelle and Eddiwarth, who are high elves. In the attack, the party of heroes is scattered. Thissraelle, in a panic, uses dimensional magic to teleport randomly away. Eddiwarth manages to get a magical strike off before being overcome by an attacker smothering him with mage’s bane, and being carried away.

This leaves Parith angry and frustrated, Korr badly wounded, with Karendle dangling up in a tree. After freeing each other, they argue and prepare to go tracking after Eddiwarth.

Meanwhile, Thissraelle has found help in a young wood elven nature mage named Illariel. The girl’s cheerful, helpful personality quickly wins Thissraelle’s trust and they soon rejoin the party. They discover that the patrol of wood elves that had attacked them has been themselves attacked by an insurgent squad of high elven soldiers. This is further complicated by the fact that this group of soldiers is led by Illitharin, of the Dragon’s Flame, who was involved in the planning of the cathedral attacks, and has been pursuing Thissraelle (through Karendle) for months. Thissraelle and Parith must both confront their own prejudices and come together to rescue Eddiwarth.

The party pursues the high elves. Karendle approaches them, pretending to have captured Thissraelle. In the ensuing fight, Illitharin is killed, Eddiwarth and Karendle are both wounded, the remaining wood elves freed, and the invading high elves scattered.

Finally, the wood elves, encouraged by Illariel, welcome them and help equip them and guide them to a mountain trail to find a shrine to the “Dragonfriend”.

The party begins the journey up the side of the mountain toward the shrine. On the way, Thissraelle and Parith work out their differences as one elf to another, and Thissraelle comes to see the divine blessings that have brought her along this path.

They arrive at the shrine and encounter the dragonbonded soldier. To Thissraelle’s surprise, she also encounters her father. Immediately after, two dragons attack. The party fights valiantly, including the little drake that Parith had been keeping, but several of them are injured, and they struggle. Thissraelle is surprised to see her father fighting against the dragons. She had assumed that he was connected to The Dragon’s Flame, and was leading them in an effort to capture her. However, he is able to defeat one of the dragons using dimensional magic.

Another dragon, a large, gray, snake-like beast, swoops into the battle, and quickly defeats the remaining green dragon. Thissraelle’s father introduces him as Heathrax, the one that she and Korr had been looking for.

The party, along with Jaxil, Thissraelle’s father, and Heathrax, flee into The Vast before more dragons come to attack. In Heathrax’s home, Thissraelle learns that her father did not order the attack on the cathedrals, that he came to the mountain to help her fight the dragons, and that he has been proud of her for her journeys. Karendle has found new confidence in herself as a fighter, and Parith finds himself curious about the dagger. Heathrax agrees to take Thissraelle on as a student of magic, and Thissraelle and Eddiwarth confirm their love.

Back at the shrine, the dragonbonded that was defeated rises up again, and Tonklyn and Kirraxal direct it to go to Emberfire City. In the Graemal mountains, Granthurg contemplates the dagger and makes plans to learn more about it.

Jump to the start of Book 3 here!

Jump back to the synopsis page here!