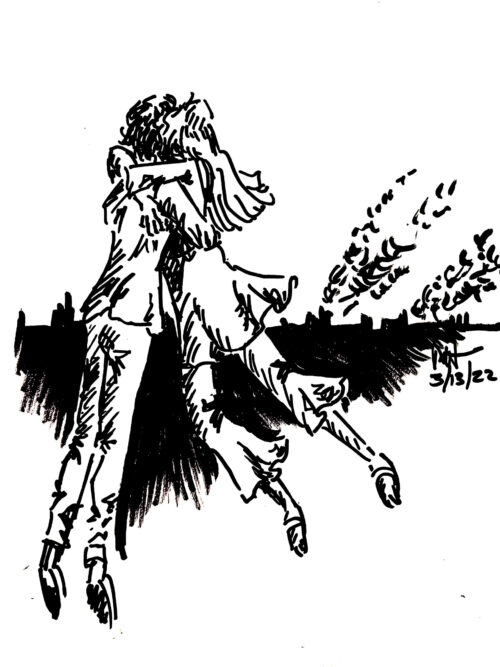 A Joyous Reunion, a Bittersweet Reunion

The sun was getting low in the western sky, bathing Twynne Rivers in amber. Eddiwarth stood between the palace’s parapets, leaning on the battlements and contemplating the sight of the sprawl of the wounded city. Beyond the Centertown wall lay the crowded buildings of the InnerWall sector, many still smoking and smoldering, many others collapsed. Beyond the wall, fading into the distance, lay the OuterWall slums.

To his surprise, he had seen less damage beyond in the Outerwall quarter. I guess the dragons didn’t think the poor were much of a threat. Lucky them.

“Hey, Eddiwarth, where’s Parith?” Illariel asked, stepping off of the stairway onto the battlement floor.

Eddiwarth jumped and glanced back over his shoulder to see who was asking, then returned to the solitude of the view.

Illariel joined him at the wall and waved her hand at him. “Well? Have you seen him?”

Eddiwarth broke away from his thoughts and smiled at her. She somehow looked a lot older than she had in the forest last summer. She’s been through more than enough for one lifetime. We all have. Ari chipped and chittered as she crawled over the battlements. She can still move a lot on six legs, I see. He breathed in and sighed, stretching his shoulders. “The last I knew, Parith was out in the city looking for the nobles of the Northil and Kaelig houses. He intended to let them know what had happened. Maybe they can keep order in the city for a while. But that’s just what the captains of the guard told me. I’ve spent the afternoon asleep. He was gone when I got up. Ryxitt was gone, too.”

“Yeah, I wasn’t feeling well when I tried to heal him the first time, but later I felt better and recovered more of my will. The dragon flew away after I finished healing him. That took a lot.”

“Thank you,” Eddiwarth frowned, “I would have liked to have seen him off, though.”

His gaze drifted out over the palace and the city again. “I wonder where Shylai’a is. We looked for her all this morning.” Illariel shook her head, unknowing, and Eddiwarth continued with a sadness in his voice, “I hope she’s not hurt. She’d have no one to heal her.”

He smiled at her, adding, “It was really good to have you along on our journey. You helped us so many times. Ari, too.” Illariel looked out over the city, a small smile on her lips. He bumped her shoulder. “So what’s next for you? Will you go home now?”

She nodded, her lips turning downward slightly. “I miss my family. I hope they’re OK. They said that the attacks weren’t too bad in the deep forest. But, that was weeks ago.”

“Hey, don’t worry. We’ll get you home.” Something that smelled vaguely like comfort drifted past Eddiwarth as he spoke. He glanced over at Ari, who flexed her palps.

He looked down at the ruby in his hand and sighed. The gem looked smoother, like the flames that morning had melted away the roughness and the harsh edges of the crystal. Home. Where’s that?

The two of them stood in silence, watching the sun droop lower and lower toward the distant treetops of the western Umbrawood Forest. A few birds darted past them, chirping out a song. Illariel said, “It’s so strange. The city is quiet, and not a dragon in the sky. It’s weird how quickly it all changes, then changes again.” Eddiwarth nodded.

Something bright flashed in the northern sky above the city and they both snapped their gaze to it. A gray oval shape burned into the reality of the air and grew wider and wider. Eddiwarth focused, squinting. “Is that… a portal?”

Away in the distance, a long dragon head and neck flew out of the hole in the sky, sliding back and forth like an eel swimming in the ocean. It was gray and white, but the low sun sparkled yellow off of its scales and wings.

Illariel tensed, her knuckles going white on the parapets. “Oh, no. I spoke too soon.” The great wyrm continued to flow out of the portal, larger and longer by far than any of the dragons they had fought the night before. She pulled on his arm. “We’d better get inside! Come on! We’ll sound the alert!”

Eddiwarth shook his head. “No,” he whispered, his lips slowly growing into a smile. “No need. I know this one!”

Eddiwarth! Are you here? Thissraelle’s sweet voice entered his ear.  It sounded afraid and hopeful and perfect. Always perfect. Eddiwarth! Answer if you hear me! Are you alive?

His chest swelled with a fullness he hadn’t felt in a long time. He saw Heathrax sweeping over the city, and even through the haze, Eddiwarth could make out Thissraelle riding on the dragon’s raised wrist holding her hand up to shade her eyes as she looked over the city. For a moment, his heart and breathing stopped. It’s her. He blinked his watery eyes and shouted. “THISSRAELLE!” I’m here! I’m alive! I see you flying!”

She began turning side to side looking frantically for Eddiwarth.

I am! I’m here! I’m on the palace tower. He started jumping up and down and waving his hands.

Heathrax turned and snaked directly toward the palace, his wings flapping and folding to help his balance. It didn’t take long for them to close the distance. Eddiwarth could see Thissraelle more clearly, now, her white hair and loose tunic flowing in the wind. She swung her leg over Heathrax’s hand and flew on her own straight to the tower. Eddiwarth beamed.

“She’s here!” Eddiwarth shouted at Illariel, shaking her by the shoulders. He swirled his will inside of him and launched himself up into the air to meet her. She flew into him and clamped her arms tight around him, the impact tumbling them through the sky like leaves in the wind. When the spinning slowed, she held his face and smiled at him tenderly, her eyes wet and gleaming. She gently swept the hair out of his eyes before she slowly brought his lips to hers. A warmth traveled through him, merging them into one. They hung there, floating above the palace, their arms pulling each other tighter, closer, their kisses blending their souls.

Slowly, Eddiwarth lowered them toward the tower, finally breaking the kiss to glance down and see the battlement. His heart calmed and he breathed a deep and tranquil sigh. She was there, in his arms, and the shattered world around them was, for the moment, at peace.

When they touched the stone, Thissraelle held on, her face buried in his neck. A wind blew around them as Heathrax settled onto the tower to rest.

Her voice rang in his head. When I saw you burned, I thought you were dead. I thought my life was over. I tried so hard to find you but the storm flipped me through time and everyone was fighting and dying and I… I’m just so glad you’re alive. She sniffled.

He stroked her hair. We’re together now, that’s all that matters. I’m so glad you came for me. I love you so much.

I love you, too. I’ve loved you since before I even realized it. I hope you never doubt that again. I’m so happy to see you alive! What happened?

He sighed. Where do I start? In a heartbeat, his mind shared images of his time locked away, his speech to the dragons, and his struggle in the flames. She clung to him, trembling as she felt his ordeal.

Another moment after his story was finished, he felt her arms ease their grip. She didn’t release the embrace, though, settling into his arms. She tilted her head up to face him, with a look of understanding in her eyes.

Heathrax coughed and they both looked at him. “Oh, no!” He coughed again. “I’m sorry, I didn’t mean to interrupt you…” Thissraelle laughed, and Eddiwarth could feel it through to his heart. They glanced at each other and kissed once more with smiling lips.

Thissraelle looked away again and gasped. “Illariel!” The young elf girl had been bouncing with excitement, but holding herself back, not wanting to disturb the sweet reunion. Thissraelle broke away and ran to her. They embraced, laughing and squealing with glee.

Eddiwarth strolled over to Heathrax and put his hand on the old dragon’s arm. He looked up into his giant eyes. “Thank you for helping her.”

Heathrax nodded. “You look like you’ve had quite the adventure, one that you’re still trying to understand.”

The dragon’s brow lifted in surprise. “The Dragontooth?”

“Yeah.” Eddiwarth frowned. “Several dragons died from it. I’ll give it to you and you can decide where it should go.”

“Eddiwarth!” Thissraelle interrupted with a shriek, and his gaze snapped back to her. “Eddiwarth, look! I’m scritching a spider! Can you believe it?” Eddiwarth smiled. Ari leaned into their hands as they stroked the hairs on the top of her shell. One of her legs tapped the stone floor of the tower. Illariel laughed as the sweet smell of contentment drifted through the darkening evening air.

Eddiwarth stepped slowly over to Thissraelle. and took her into a gentle embrace. He cupped her face with his hand, stroking her cheek with his thumb before drawing her close and kissing her again.

The sun slid peacefully past the distant treetops of the Umbrawood forest.

The End of Story 7

Author’s Note: What a Reunion

I wasn’t sure just how to write this reunion. At first, I thought I would have Eddiwarth return to Emberfire in a sort of bittersweet triumphant reunion, but as I got closer and closer to the scene, it didn’t seem to fit.

As I wrote Thissraelle’s final scenes in the book, as she got more and more anxious about Eddiwarth’s life and safety, I knew that I had to have the reunion in Twynne Rivers and that Thissraelle had to come searching for him.

Writing the actual reunion was a bit tricky, too. I always get weird when I write romantic scenes. I’m getting more comfortable with it, though. I just don’t want it to feel fake or cheesy. I think that if you set up the longing well enough, the reunion will be heartfelt.

I certainly felt it when the reunion finally arrived.