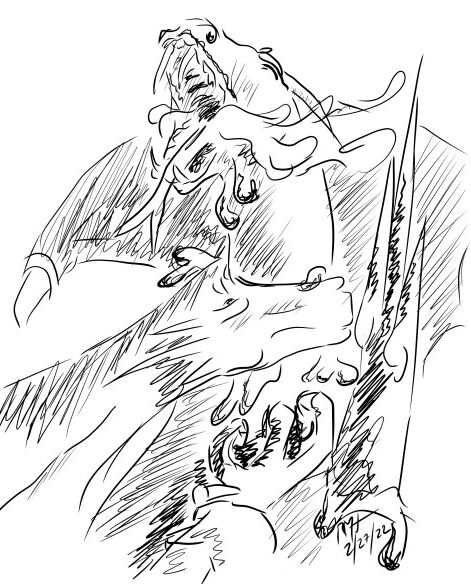 Xintalan stepped farther back, trying to take in the whole horrific scene. Exakas spent all of his guts, the last remaining drops drizzling from his lips, igniting and falling, burning, to the floor. He opened his eyes and growled, the rising pyre before him reflecting off his shiny red scales.

This is so wrong!

Exakas raised his head and body on his back legs and trumpeted a roar of victory. The other two near him joined in, sending the drakes in the air into a frenzy of wings and shrieks. All of the hominids in the hall scrambled to try to find whatever cover they could.

Why is it wrong? They’re just puny little two-legs. Tiny bugs that enslaved us for years. Why does it feel so wrong?

She looked at Exakas roaring triumphantly. Suddenly in her mind’s eye, she saw Kirraxal leading the roar in the halls of Maxxin the III back in the western mountains. A shiver of fear ran through her.

Her own guts churned and her heartbeat rushed. Her eyes fixed on his lifted face. He is Kirraxal! They’re just the same! He doesn’t care about wyrmkind, neither of them ever did! Her legs tensed and her wings quivered.

Exakas and the others ended their celebration and looked down at the raging fire burning the elf between them. Exakas’ jowls were pulled back and his lips turned up in a terrible smile.

That smile. Her eyes narrowed and her jaw steeled. He won’t stop until the entire land is burned black and every dragon is hunted and slain! Then what will be left to rule?

I can’t let that happen.

This has to stop!

She jumped into the air, propelled by her strong back legs and a stroke of her vast green wings. Jaws open wide and head turned to the side, she smashed into Exakas and sliced her teeth into his neck. The two massive bodies impacted with a rumble and the floor shook when they fell backward, smashing the pillars into pebbles.

Xintalan immediately climbed on top of him, clawing and scraping at his belly. Exakas roared and bit into her shoulder, trying to pull her off of him. Xintalan was not small, but Exakas was bigger still. He flung his body from side to side until he was finally able to flip her away. She slid across the floor and slammed into the wall of the chamber. Stones and timbers fell around her and the roof above groaned.

In a heartbeat, she was back on her feet, her head low and snarling. Her shoulder was covered in purple blood as she began circling. He followed suit, leaving a trail of his own blood from his neck and belly.

“Yea, truly thou art a traitor, thou duplicitous little whelp.” His voice was shaky and he coughed roughly.

Xintalan answered with a shriek of attack and leaped at him again, claws first. This time, he was down on all four legs in a solid stance and he took her onslaught full in the chest without moving. She clawed and bit and tore him snarling and snapping in rage and fury. He returned blow for blow, and purple flew all around them. He slammed his claws into her chest, digging deep into her wing muscles, then with a grunt, he surged an explosion of striking power into her, knocking her up and onto her back with a pounding that shook the rafters. The drakes above scattered in terror to other parts of the vaulted ceiling.

No one else in the hall dared move or interfere. The few remaining dragons had stepped aside, and the two-legs were trying to hide or flee as best they could.

Xintalan rolled over onto her side, her whole body quivering from the shock of the blast. Everything hurt. Everything was hard to move. Everything but her rage. She slid her legs under her body and tried to stand. So we’re using magic, now, I see. I can do that, too. I learned it in the forest. Her breath was ragged, but her will was strong and it filled her, connecting her heart, her life, to the stones of the floor.

Exakas eyed her with a dragon smirk and lunged into a run. He hadn’t taken two steps before Xintalan turned her clawed hand palm up and shoved it up into the air. The stone floor beneath Exakas cracked, faulted, and reshaped into a gigantic spike that shot up through his ribs and emerged, bathed in purple, out of his back. He screamed in pain as his neck and shoulders jerked to a stop.

Xintalan staggered forward with as much force as she could muster and grabbed his neck in her teeth just below the head. With all of her remaining strength, she flung her neck from side to side, blood flowing from his mouth and wounds onto her head, and hearing the crackling of his spine.

Finally, she stepped back and flung his lifeless shredded neck onto the floor with a dull thud. She heaved her guts and spat a flaming ball onto Exakas’ head to seal her victory.

She looked around the chamber into the dumbstruck faces of the other dragons. Silence filled the hall but for the cracking and licking of flames and the wind and rain through the roof. Was that fear or awe she saw in the dragons’ faces? They shrank from her, not wanting to be next on the killing floor. Her chest heaved painfully as she gasped for breath. She looked at the blood smeared all over the floor. Is that mine or his? The rafters creaked and some beams fell, burning, to the floor with a crash.

She looked at Exakas’ shattered and battered body. Revulsion and horror swept over her. What happened? I didn’t do that, did I? No! It couldn’t have been me!

She looked at the flaming pyre where the elf had stood. It was still burning, even more hot and intense. She looked at the few remaining dragons in the hall, gazing deep into their wide-eyed faces. It was me! How could I do that?

One slowly closed his eyes and lowered his head toward her. The others quickly followed. She raised her head to the ceiling and roared a loud blast. Immediately, the other remaining dragons joined in. It was supposed to be triumphant, but it didn’t feel that way to her. She looked around the great hall. Even the drakes, large and small, roared with her.

She nodded to herself. We shouldn’t be here. We need to leave. We can’t rule anyone until we can rule ourselves.

Xintalan started to sing. A low, deep droning note. It rumbled deep in her throat, deep in her heart. Within moments, the roaring faded as the other dragons joined the song with her. The resonance of their voices filled the great rafters of the hall. She stood tall, her head snaked high, singing the song for every dragon to hear. Then she spread her wings, the pain ripping through her chest and back. She pulled herself back and jumped, throwing great wing strokes through the air as she raised up through the smoke and rain to the broken gap in the ceiling. More wings unfurled behind her, flapping and lifting off.

She grabbed onto the failing roof with her claws, drew up her hind legs, and pushed off out into the rain. Still singing, the others followed.

If you’re spending a lot of your own efforts and resources maintaining the oppression of others, you’re not able to use those efforts in the expansion of your own life, and so you are also a slave to your slaves. As long as one people is oppressed, no-one has self-determination.