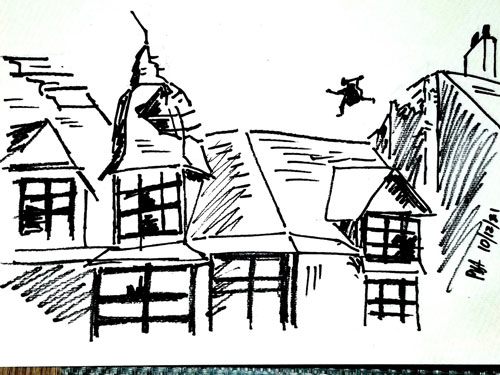 Anarchy – When governments break down

Shylai’a pulled the hood of her short cowl tighter and dipped her head as she moved down the street. It was a hot afternoon in the full summer and sweat drizzled down the back of her neck. It was uncomfortable, but it was better than being recognized by Kaelig militiamen.

The streets were almost empty. It had been over a week since the palace fell, but that hadn’t meant things had calmed. In addition to avoiding her former militia, she had also learned to watch for The Dragon’s Flame. Once a secretive cult operating in darkness and quiet, they now ran the streets, forcing conversions and looting anyone that had anything worth taking.

Various unorganized resistances tried to fight back, mostly at night. Shylai’a had heard them but with the fear of actual dragons raining real fire down on them, most folks kept hidden as much as they possibly could.

It looks like a few brave souls decided to open their shops up anyway. She paused and glanced around her. The now-constant smell of burned wood wafted past her in the breeze, even though there were no nearby buildings actually still on fire. She stepped out from behind a broken overturned vendor cart and nodded an all-clear signal to Eddiwarth, who acknowledged the gesture and moved toward her position on the other side of the street.

No, don’t look at me. Don’t give me away. We don’t want to draw a raiding party or a press gang.

She spun around and pretended to be studying a dress hung under an awning in front of one of the few shops along the street that hadn’t taken much damage. She stole a look at Eddiwarth’s reflection in the window next to her. There’s Illariel with him. But without Ari? She usually jumps along with Illariel like a huge puppy. And where is Korr? He was supposed to be with me.

Shylai’a checked the street again. Illariel and Eddiwarth had moved farther down the way. She saw a quick motion above and, glancing up, saw Parith stealing across the rooftop.

Illariel checked her sword obsessively and stepped into the street, quite a ways behind Eddiwarth.

A hunched-over old man with a cane came tap-tapping toward her, along the walkway. She hesitated and ducked away. Is that him again? She looked, and for a half-second, they locked eyes. No. Shylai’a sighed with relief, that’s an old lady. That old madman is the last guy I need to deal with right now.

Eddiwarth and Illariel stopped, looking at some baskets and talking in whispers with the vendor. The man looked around fearfully and gestured to a spot directly across the street. Shylai’a slowed and leaned against a building. The windows had been smashed out and glass shards sparkled under her feet. As she gently stepped past it, her shoes crunching, she saw overturned tables scattered through the interior. Light shone down from huge gaps in what used to be the roof of the inn.  Too bad I can’t stop in for lunch. I didn’t have much for breakfast.

She looked away, down the opposite direction. A breeze blew a rag along the walkway. She moved, slinking along the wall of the inn.

Someone grabbed her arm from behind, Startled, she jerked away from the attacker, her other hand flashing to her sword hilt.

Korr stood at her side, his hand held forward in a defensive posture. “I’m sorry,” he mumbled, “I didn’t mean to scare you.”

“Yeah, well, be a little more careful then.” She hissed back. She looked back to Eddiwarth, her arms relaxing, but her heart was still rushing a little. “Is that the place?” She gestured with her head to the dark storefront Eddiwarth was watching.

Eddiwarth looked up and down the street, then casually crossed to the shop door. Illariel didn’t notice right away, then hurried to catch up. “He’s moving,” Shylai’a noted. “Should we follow?”

“Yess…,” Korr said slowly. He looked up for Parith but didn’t see him. “I think so.” She grabbed his arm and pulled him forward. It only took a few strides to arrive. Eddiwarth pushed hard against the door and it moved slowly inward. A deep scraping noise came from debris resting behind the door. As soon as the way was wide enough, Eddiwarth stepped through, Illariel right behind him. Shylai’a raised her brow at Korr. He gestured her in, and she stepped through the portal.

The interior was dim, with only a bit of light shining through the two windows at the front of the store. Even with little light, Shylai’a saw the disarray. Books lay strewn across the floor so thick it was difficult for her to move. Shelves had been tossed against a wall or pushed completely over.

With a flick of his wrist, Eddiwarth produced a small flame in his hand and held it up to shine around them. Shylai’a stepped away.

“Don’t worry,” Eddiwarth sighed. “I’m not going to burn it down.” Shylai’a just gave him a skeptical look and kept her distance.

Korr observed, “Is it strange that it hasn’t already been burned?”

“Not many shops along this street have been burned,” Eddiwarth said, then thought about this for a moment. “So someone would have had to come in here, trash the shelves, scatter the books, and not light them on fire, nor steal them.”

Shylai’a grunted, “If you’re looking for food and all you find is books…”

Korr finished, “…or if you’re looking for the Seekers as we are…”

Eddiwarth nodded, “…and all you find is books…”

Somewhere outside a bird sang out a sharp whistle.

Illariel spun, kicking books out of the way. “That’s Parith!”

As she started to scramble over the mounds of tomes, shouts and shrieks echoed from down the street. Aw, flames! Shylai’a drew her sword.

A very “polite” way of putting what we have here is a “government in transition”. That sounds nicer and cleaner than “a bloody, burning coup”

Whenever there’s a violent change in the government, there’s a period of chaos and confusion before the new government fully establishes order. This period of anarchy typically requires more blood and burning, because the new king (in this case) has to establish enough fear to calm people back down.

That anarchy can manifest itself in a lot of different ways. If there’s little fear, little control, it could break down into looting or rioting. It might have periods of relative peace where the chaos and violence themselves cause enough fear to keep people at bay so that even the anarchy can exert a certain amount of natural control.

Really, though, this little taste of anarchy here in the land of Wynne is pretty mild compared to what I have planned for poor Twynne Rivers.

Just imagine me wringing my hands and laughing maniacally.