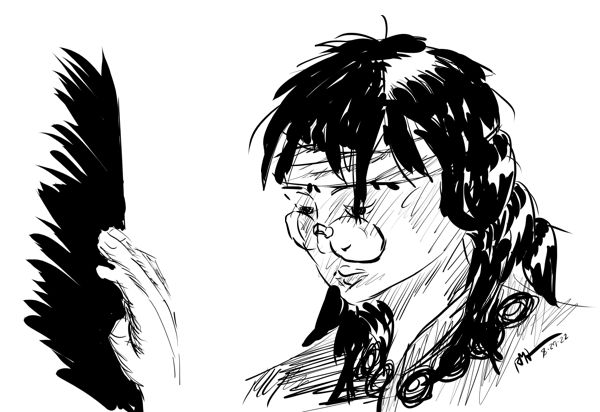 When Being Sick Settles In

Mithrabella gently padded her mother’s red and sweaty forehead with a rag, damp with cold water. Water that had been snow up until about an hour ago when Mithrabella had brought it inside and set it to melt on the hearth. She spread the rag out on Deera’s head and gathered up the warmer one that had been resting there before. It plopped into the bucket with a loud and almost irritated flop splash.

“Don’t say anything,” Deera commanded in a mumbled tone.

Mithrabella scowled. “What do you mean?”

Deera humphed and looked away. “Oh, fine. Go ahead. Say it. You’ve been wanting to say it all day.”

“I don’t believe you. Not for a minute.” Her mother looked her over with a skeptical eye, bleary as it was. “No matter. I’ll rest up a bit, then I’ll come get supper ready. Did you get any lunch? Your father gets irritable if he misses his lunch.”

“Yes. We did. We’re fine.” My father gets irritable when he does get his lunch, too. “You’re going to rest now. I can take care of dinner.” Mithrabella wiped her own brow with the cleaner towel on her shoulder, then picked up the small bucket at her feet.

Deera nodded and settled her head into her deep pillow. She folded her fingers together and rested them carefully on the blankets over her belly and closed her eyes. “You’re such a sweetheart, ‘Bella. I don’t know what I’d do without you. You need to relax and not take so much on your shoulders.” She coughed a deep raspy husk. “When this takes me you’ll soon enough have a lot on those shoulders.”

Mithrabella stopped at the door and shook her head. By the breath of the Creator, I don’t have the patience to deal with this now.

Her head dropped back and her hair slipped out of the bun, tumbling onto her shoulders. “Mom, you’re not dying. You’ve got a simple grippe. You’ll be back on your feet in two days at the most. That is, if you’ll just rest.” And if you’ll actually let anyone else rest.

“I don’t know, dear. Harva said that three people on the next street over died from it last week. It’s got her looking mighty pale and weak, too.”

Mithrabella slapped her empty hand over her eyes and grit her teeth. After sucking in a harsh breath, she held it, counting, hoping it would calm her. Harva is sick, too? So what on the whole Creator’s shaking earth made you think it was safe to go visiting?

There. I said it.

She stepped out of the room and with intense care and control, slid the door closed until it latched with a click. It was the quietest loudest click that door had ever made.

I just didn’t say it out loud.

“‘Bella? Dear?” Deera’s voice was muted by the door.

Mithrabella froze, tension shivering through her spine like a winter wind. “What, mama?” She waited through the moment of silence that weighed heavy over the door. Finally, she turned around and opened it again.

Her mother tossed a hesitant smile at her from the bed. “Harva mentioned that there was a healer in the Outerwall. Maybe you could go find him. He’s apparently a beggar man out there.”

“The Outerwall? Mama! I’m not going— what are you thinking?” Mithrabella stopped herself cold, steeled herself, and finally spoke very evenly with a false calm that belied her anger. “Mother. The mages and healers are all gone now. We just have our own wits to save us. That’s why we shouldn’t go risking our lives out in the street, and especially Not. In. The. Outerwall! Now, you will sleep until I bring you dinner. Is that clear?”

Deera opened her mouth, then seemed to bite back a reprimand, and settled her head into her pillow. She nodded demurely.

Mithrabella nodded her head to punctuate her commands, slammed the door shut, and stormed away.

Author’s Note: Whose Fault is is it when you get Sick?

Caring for the Sick is always a dicey situation. How do you do it without getting sick yourself? But then, you can’t not take care of them, you love them, and they’re sick, so you do it anyway, right?

Mithrabella is trying hard not to be mad at her mom, but it’s not easy.