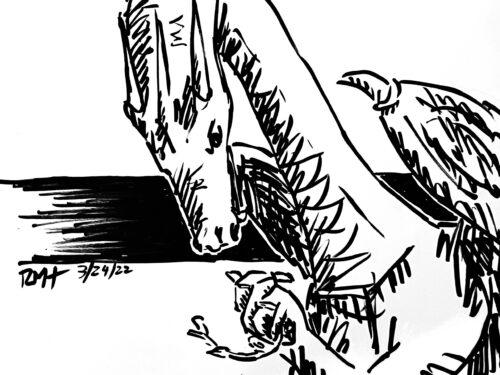 Xintalan stepped into her chamber through the wide hallway and lumbered toward her pillowed dais. She had just come from feeding on a deer she had hunted on the lower mountainside, and had flown high circles around the mountaintop before dropping to land on the terrace now reserved for her. She had passed the two guardian drakes on either side of the entrance with a nod to each one. They had each growled in return, in a show of respect.

She preferred to hunt at night. All the decades she had spent in the forest had taught her how to find prey easily, and fewer other dragons were flying around the mount at that time.

Mostly, she just preferred to be alone.

As she stepped to her bed, she passed the massive gilded ring resting on a soft carpet on the floor near the dais. Easily three feet around, and open on one side, like a horseshoe, it glimmered in the dim light of the oculi hanging above. Several large gemstones were set in each of the five prongs that pointed toward the ceiling.

Ryxitt had brought her the crown when he had arrived from Twynne Rivers a day after she and the others settled in. He had placed it in this chamber and told her that she should claim the room and the crown. It was, after all, where Kirraxal had slept, and what Kirraxal had worn.

Kirraxal! She huffed smoke out of her nose, blowing it over the crown in disgust. I don’t want to be anything at all like Kirraxal. He was a bloated arrogant flaming dung-pile of a twit with a god complex. Exakas was no better. Good thing they both died before either one could fly me. The thought of dropping one of their eggs in the world makes me want to flame. I’ll die before becoming anyone else’s queen.

She climbed onto her bed and circled it, settling down until she rested and curled her tail under her neck. She flexed her wings lightly over her in a canopy and settled her head down on the pillows. They were soft, fit for royalty, but she still couldn’t quite get comfortable.

He slept here. In this very bed. I wonder if this is where he and Tonklyn hatched their plans, or if that happened down in the great hall.

She lifted her head slightly to peek at the crown, then scoffed. Why on the Creator’s shaking earth would anyone want me to be the queen? And why would I even want the honor? The last Dragon King’s reign didn’t last even a week.

When her eyes eventually drifted away from the crown, she noticed a scroll sitting next to it on the rug. She narrowed her eyes in suspicion. That hadn’t been there earlier. She rose and crept off the dais. The scroll wasn’t large, for a dragon, though a human would have had trouble carrying it. She picked it up and sat back, unrolling it.

Her head tilted slightly to the side. Poetry?

She glanced over it and saw Ryxitt’s name at the bottom. Scowling, confused, she read in the old tongue of the great wyrms:

The mantle that thou wearest is woven of struggle

Threads against the constraints and the expectations around thy neck

Thy sceptre is forged of choices made and pronounced

Inlaid with gems of fear and uncertainty, yet wisdom

Wisdom will be thy crown

She set down the scroll with a sigh, then reached out her clawed hand and picked up the crown.

I have REALLY, R E A L L Y loved writing Xintalan. She has become one of my favorite characters.

Well, yes, each character is, in their own way, my favorite, but Xintalan, well, you know… She’s great. Like so many of the others, she’s struggling to find her place, struggling with the expectations of others, trying to define herself. She’s strong-willed, but not certain how to use that will.

Spoiler alert: She has a BIG role to play in Book 4! I can’t wait to get started!