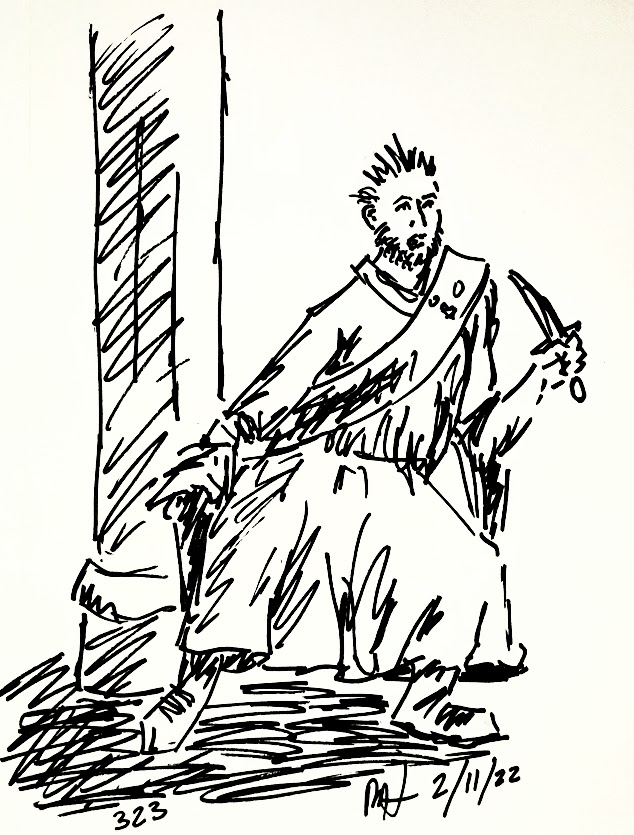 Someone slammed hard into Eddiwarth, knocking him to the stone floor with a grunt. The two of them tumbled on the stones and Eddiwarth came to rest on his stomach. His attacker scrambled off of him and Eddiwarth rolled his head to see him crawl frantically away. He was a large man, tangled up in dark robes. They would have looked fancy if they hadn’t been so twisted and disheveled. From behind, the man looked human, but Eddiwarth wasn’t sure.

Eddiwarth leaned on his arms to try and stand. His shoulder screamed with pain and his arm went weak, dropping him back to the floor. Wincing, he rolled onto his back and tried to sit up.

The man reached the dagger and scrambled to his feet. He held it in both hands, trying not to shake. His face was sweaty and his eyes wide with anger and fear. His hair was short, but tossed, and his twisted grimace had a bearded chin. He crouched, ready to jump and to strike, swinging his arms back and forth to point the blade at one dragon after the other. “It’s MINE! It’s MINE!” He shouted, laughing and gasping for breath, “You’ll never get it away from me! Stay back, wyrms, or you’ll get it in your guts!”

A low rumbling growl came from behind Eddiwarth. He looked back to see the head and neck of the king dragon snaking above him, focused on the newcomer.

The man with the dagger kept raving, “I am the king! I am the High King! You will all bow before me!”

The large green dragon across from Eddiwarth snarled. The man in robes spun to threaten her. Immediately the king dragon started coughing and retching. Eddiwarth swung himself around with his legs and pushed, leaning on his good arm, trying to scramble away. The man screamed and ran as a cascade of flaming heat exploded into a thousand burning drops, splattering from the floor where he had just been.

A few globs of burning bile landed close to Eddiwarth and he hurried away.

“My dagger!” The man shouted. He stood and jumped toward the pool of flame, but the heat turned him back. In an instant a dragon’s foot splashed into it, spreading the fire farther. The dragon snapped at the man, who dodged and ran. Another dragon lunged to catch him.

“Parith!” Eddiwarth called out. He tried to look past the flames to the door, but his line of sight was blocked by the heat and the dragon. Pain surged through his shoulder and across his chest and he reached across with his right hand to brace his arm. As growls, screeches, and shouts filled the air, he found himself near the central dais, and he leaned his back against it.

“Parith! Korr! Run!” He shouted. His voice was immediately lost in the echoing cacophony.

What a mess! I’ve done it again. He shifted his good arm so he could wipe the sweat that had formed on his brow, partly from exertion, partly from the heat of the flames. Some of it ran into his eye and stung. He wiped again, winking hard to try and clear it but it didn’t help. He blinked and looked around. Blurry shapes of dragons and bursts of flame spit flew. A few more blinks and his eyes cleared more. Drakes were flying down from the rafters and joining the fray. To his left, the doors pounded open and soldiers rushed in, shouting orders and battle cries.

So much killing! Why?

Almost instinctively, he stuffed his good hand into his pouch and pulled out the ruby he held there. I need to stop all of this. I need power!

He looked deep into the facets. Come on. Help me out, here!

The Dragontooth Dagger is the McGuffin of A Tale of Heroes. This little dagger is the thing that’s driven so much of the story. Lots of people want it, and lots of people are willing to kill for it. All it does is kill dragons. That’s its only magic.

But that’s pretty useful if you’re trying to kill dragons. It’s also good to have control of if you’re the dragon.