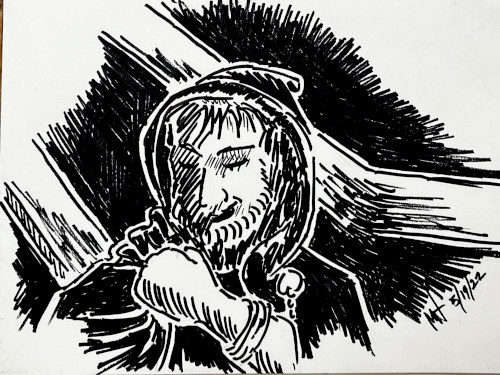 Who is the King?

When the soldiers came shouting down the narrow city street, Tonklyn’s first thought was to hide.

He pulled a ragged blanket over much of his face and hunched his shoulders. He leaped over a low drift of yesterday’s snow into the slightly inset doorway of a building next to the road. He stood, frozen, and held his breath as his eyes followed the steady stream of men rushing by. A few in this squad wore the familiar green and red livery of House Kaelig’s militia over heavy stitched gambeson armor. Most of the others wore whatever ragged coats and leggings they could find. Those running in front carried drawn swords, and those following carried their spears ready in both hands.

Traitors! They’re traitors to my crown!

The shouts echoed off the buildings farther down the street, blended with their footfalls, and were soon joined by the clanging of metal on metal. Shrieks of pain and orders being barked quickly formed a countermelody to the violent sonata in the small plaza he had just come from.

Are they gone? His shoulders relaxed and his breath returned. He eased back the blanket and stretched his neck out of the alcove slightly. He couldn’t see the opponents clashing past the gradual bend of the street, even though the noise was still quite close. It won’t be long before I make them kneel again. I wonder who they’re fighting this time? Thieves? Another noble house? Maybe Northil or Thornwell…

The sky above Twynne Rivers was cold and overcast, threatening more snow. Tonklyn stepped out into the narrow street, stealing another quick glance in the direction the soldiers had gone. He shook his head. All this fighting over who gets to be king. As if it’s even in question. I could have kept order. Nobody would have dared to fight in the street.

He peered over each shoulder. Snowy debris from the occasional toppled or burned building lay in random piles at the street side, as if they were hoping that someone, someday, would haul them away. There weren’t a lot of people out. That was partly because of the fighting and partly because it wasn’t a main market thoroughfare of the Innerwall Quarter. Mostly the people of the city were either already indoors or trying to find an indoors place to get to before nightfall. Tonklyn could already feel a deeper chill than normal drifting in on the wind.

The noise of the fighting was more distant, now. He pulled his blanket tighter and shuffled up the slight incline of the road in the opposite direction.

His stomach grumbled. Someone farther up the bend shrieked. Tonklyn paused and listened, his eyes narrowing and searching the thoroughfare. He moved quickly to a building on the other side. He heard more shouting, followed by a dog barking, and he stepped under the blackened overhang and through the open doorway.

The building was in ruin. Beams were burned black and broken, and supports lay everywhere on what had once been the floor. One of the boards under his feet groaned and broke, dropping his boot a few inches before it rested on the ground beneath. Tonklyn flailed his arms to try and keep his balance. Once he stabilized his feet and his nerves, he tightened his blanket once again.

He lifted his foot out of the shallow hole in the floor and stepped away with more caution. Feeling a bit lost in the dark, he reached out to find something to hold onto for support and gripped a fallen timber. His eyes were finally opening up to the shadows, and he could see the squalor more clearly. The building itself had probably been looted many months before, but just to be sure, he looked around to try and figure out how to get to the back rooms where the scullery kitchen would have been.

He moved to the crumbled remains of a wall, lifting his blanket and dark ministerial robes so he could step over the wooden structure and wriggle through a gap. Reassessing the new room’s larger space, he stepped forward.

Tonklyn froze then immediately slipped aside. He crouched down behind the unsmashed half of a chair. After a moment’s breathless silence, he lifted his head and checked for the source of the grunt.

Tonklyn’s eyes narrowed and he crept around the chair. The floor creaked below him and he held his breath. Whoever was there didn’t seem to notice him, so he moved ahead, crawling more quickly. He looked past an overturned and empty chest. A form lay in front of him on the floor covered in a dark cloak of heavy wool. The sharp smell of alcohol wafted up to hit Tonklyn full in the face, making him draw his head back and twist his nose away. As he did, he saw one empty bottle and another almost so, both tossed on the floor. Tonklyn smirked and nodded to himself.

“Khah! Nggahh!” the body snorted, then rolled toward Tonklyn, onto his back.

Hyew! What a flaming disgusting sight. The man had apparently thrown up while laying there on his side in a drunken stupor, as some of the slime still dampened his gray shaggy beard. The rest stained the floor, partially congealed, partially frozen.

He’s got a great cloak, though. It’s nice. Heavy. Tonklyn looked at his own threadbare blanket, then back at the cloak. It had fancy polished clasps of cast brass holding the connecting chain between them.

Tonklyn smiled as he reached and unclasped the chain. He pulled the cloak back off the man’s shoulder, then slid his hands underneath the drunkard’s waist and hip. Tonklyn shifted his knees and heaved the man up and over, rolling him partially off the cloak and landing his chest in the thin pool of vomit beyond.

“Heyyy, lemme shleep!” the man groaned a complaint, shaking his head. Even with his eyes still closed, he tried to roll back over, his arms reaching for his covering. “Isscold.”

Tonklyn whisked the cloak away from the man and yanked it out from under him, tumbling him across the floor. His arms flailed about, trying to grasp at the cloak and his head knocked into a fallen beam.

“Owww! Heyy!” He struggled to sit up and reached for Tonklyn. “Gimme that! Gimmemme cloaaak!”

Tonklyn whipped the cloak around his neck, over the blanket. He shook his shoulders, adjusting the lay of the cloak over it. The smell of the alcohol was strong, but the heavy warmth of the wool felt good.

“Thasssminne!” The man grabbed the front tail and started trying to pull it off of Tonklyn.

“Let go!” Tonklyn spat, spinning to toss the cloak tail out of his reach. “I am your King! I require it! It is your privilege to share it with me!” Tonklyn stretched up to full height and held his shoulders back. He glared down at the man, set his boot against the man’s side, and shoved him back onto the floor. The man lifted his head for a moment, then rolled over and curled up, trying to keep himself warm. In a moment, he started snoring.

Tonklyn made his way through the rubble back to the front of the building. As he stepped onto the street, snow was falling from the darkening sky. A chill wind slid down the canyon between the buildings, swirling the flakes around him. Tonklyn clasped the cloak and felt for the ties underneath, fixing them to keep the gap closed against the wind. He smiled as he pulled the hood up over his head and continued around the bend.

I’m tired and hungry. First, I’ll scrounge some food, then a quiet place to lay down.

So, Tonklyn still thinks he’s the King, eh? He hasn’t figured it out, yet. Spoiler alert: That’s what book 4 is gonna be all about.

OK, so that’s not much of a spoiler. But I do have big plans for him, and I’m excited to get started. There are quite a few characters that I’ve set up to be in the five-man band this go around, and they’ll all be dealing with the trauma that came to a head at the end of book 3. It’s not gonna be pretty, I can tell you, but it will be a fascinating ride!

Meanwhile, all of the rest of Twynne Rivers will also try to push on, and most of those will be trying to figure out who is going to be the king for real. To King or not to king, that is the question, right?

Anyway! Come join us! Sign up for the mailing list to be notified when new scenes go live, or join me at patreon to get some exclusive short stories of some of the main characters!