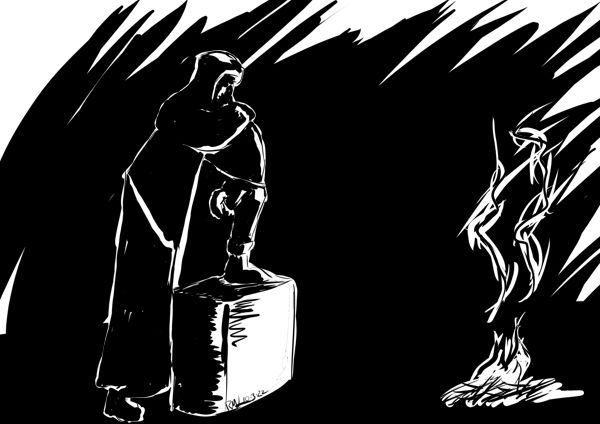 The Knight of Shadows

This happened occasionally, and he didn’t like it. It meant he would be tired the next day. He wouldn’t be able to focus. His routine would be broken.

He didn’t like it when his routine changed. It had been changing a lot lately. More people were getting sick. When they got sick, someone came to fetch him for healing.

Normally, he would spend his days just begging. That’s how it worked in a beggar’s bond. Everyone went out to scrounge or beg. Everyone shared what they got.

There was a street in the outerwall where he always went. It was on the main road out of town. The road followed the southern fork of the Wynne. It was his spot to beg and everyone knew it. Mostly, he would just sit there with an empty cup and hope someone would drop in a copper shard. He wasn’t good at begging like the others in the bond. They knew how to talk to people. Kiffra didn’t like to talk to people. He didn’t like to look at them, either. Not directly at them. Not in the eyes.

That thought made his elbow feel a little tense. He reached across his chest and rubbed the elbow until the feeling passed.

Will Shylai’a be good at begging? He thought about that. He thought she would probably be a better guard than a beggar. She looked tough. She had carried a sword last summer. She didn’t have one now, though.

Today had been a good begging day. If you considered the whole bond. After the two men brought the bird home, others came back to the chapel. They brought food and coins. Kiffra had busied himself cutting up the food. He used a dagger the bond had found. There was only one blade in the whole lot of the beggars. By the time Melyeah returned, Kiffra had already cut up the small collection of tubers and roots. She hurried to Shylai’a right away.

“Oh, child, you’re looking so much better. Have you eaten?“ Shylai’a shook her head. “Oh, we need to feed you! Kiffra! Bring some of that bread!”

Kiffra grabbed the loaf. He frowned. I should have thought to give her this earlier.

Tembo came home, too. They both fussed over Shylai’a. Once Shylai’a had eaten a few bites, Melyeah had started the water to boiling. Then, Kiffra had helped her cook the bird. After weeks of almost nothing each day, tonight had felt like a winterfest feast.

I’ll remember to mention it in my prayers tomorrow morning.

The night air was cold. A dog barked a long way away. One of the girls of the beggar’s bond rolled over under her blankets. She started snoring loudly. Kiffra sat up and looked over at her shadow. He glanced around at the others sleeping in the cluster under the chapel.

He stood. Wrapped in his blanket, he walked to the fire ring. He sat down.

It must be very late in the night. Maybe almost morning. The fire is almost out again. He reached over to grab a few shards of wood from a pile. He tossed them on the embers.

I should pray for the sick people, too. He had been led away from his begging spot twice that day to heal someone with the new pox. There are a lot of sick people. More and more and more lately. Two today, Shylai’a last night… If it keeps happening, I won’t have time for begging. It’s a good thing I pray so much, or I wouldn’t have enough will to heal anyone anyway.

He sighed and pulled his blankets tighter. Something felt odd in the night. Someone’s here. He couldn’t see anyone. Even as the fire caught on the sticks, it was too dark. Kiffra just felt the presence of a shadow. He stared back down into the tiny new flames.

A tall man in a black cloak stepped into the firelight and spoke. “What is he doing?” Kiffra only glanced up for a moment. The man’s hood was up. His face was dark. He wore a black shirt under his cloak. A long sword scabbard dangled in the folds.

“I can see that. That’s not that I was asking.”

Kiffra looked up with his brows wrinkled in confusion. Oh! He means it differently. Kiffra pursed his lips. “He’s Ok. He yells at people a lot. He thinks he’s the King.”

Kiffra continued, “He might be. It’s possible. Everybody says there’s no king in the palace. They say that the dragons killed King Hastonne. All of the houses are fighting each other. It makes begging harder. So…” Kiffra shrugged, “it might just be him.”

The figure looked toward the sleeping beggars.

“King one day…,” Kiffra muttered, “beggar the next.”

The figure regarded Kiffra in silence. Kiffra rubbed his elbow again under the blanket. “The dragons are gone now. There used to be thirty-four dragons in the city. There were probably more in Umbrawood. They’re all gone now.” Finally, he asked the man in black, “Are you here for Shylai’a?”

“No.” The man turned, spinning his cloak. Before he vanished, he added. “The old one will take care of her. Thank you.”

Kiffra nodded and returned his stare to the flames.

Author’s Note: The Knight of Shadows

The Knight of Shadows is an interesting character. The first time I ever interacted with the Knight, as an idea, was when I used him in a gaming session for The Hero’s Tale, our RPG. The Knight came to my son to scare him a little, a sort of dark apparition in the night, delivering an ominous message. Since then, I’ve spotted him into my Tale of Heroes stories. Some of you might recognize him as the Knight that “haunted” Tonklyn back at the end of book three.