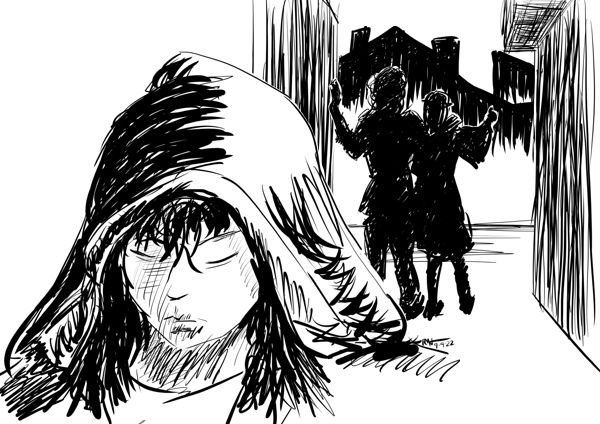 A plague? Is a plague coming?

She stumbled as she stepped along the street, reaching out from under her cloak to brace herself on the wall of a building. She struggled to focus her eyes on the ground in front of her. Sucking in a freezing breath, she fell into a long fit of coughing. Her throat was raw and it hurt to swallow, even to breathe.

She took a tentative step, still holding herself up against the stucco wall. Her back and head ached and her body shook with another wave of shivers. Between the frigid air and the raging fire in her head and heart, she wasn’t sure what to feel. Sometimes she felt like her skin was as dry and tight as a drum, and other times the sweat ran off her neck and back like a mountain river. In the morning she felt like she was starving, and by afternoon her stomach would reject anything she could scrape together to eat.

She hugged herself tightly, sliding to the cobblestones.

I’ll just sit here for a while and cough myself to death.

It could happen, she knew it. She had seen it happen to others. But for some reason, it hadn’t happened to her yet,  much as she wanted it to.

Well, some days I want it to.

After another round of aches, shivers, and shudders, she frowned. Today might be one of those days.

She raised her head and looked across the street. Snow was drifting and spinning down between the buildings. She blinked to try and clear her vision, but had to reach up and wipe her hollow brown eyes with her hand. A long and scraggly strand of dark brown hair got in the way, so she pushed it up under her hood.

Her face was thin and gaunt. Between living on the streets for months and getting sick, she felt frail. She used to feel strong and vital. She was never tall, but was one to be reckoned with. She had never cared about being pretty. Still, at times she wondered if he had thought she was.

She scanned the gentle downward slope of the street with squinted eyes. A wagon, guided by two men with dark cloaks rolled slowly by. A heavy tarp draped across the wooden bed hid several lumpy forms. One of the men paused for a moment as they passed her, looking her over from behind a leather mask with a long stretched out beak where a nose should be. Between the mask and the cloak, Shylai’a thought he looked a lot like a crow, and half expected him to fly away.

He looked away from her and the wagon continued on.

Yeah, not today, sir. She smiled, then coughed. But come check on me again tomorrow.

As she watched the wagon and its crew wind down the curving slope of the road, and pass onto another street, she thought the scene looked familiar.

At first she dismissed the thought, but after a moment, her brows furrowed and she studied the road.

I’ve been here before. Yes. She slipped her head from side to side, checking up the street, then down. In spite of the ache in her neck and head as she moved, she kept glancing back and forth.

She stood, bracing herself on the wall again. She pointed up the road, to no one in particular. I stood right over there. I had just gotten away from that madman, and… She pointed back downslope, through the snow. …and I saw the lady and the child there. And the soldiers chased her from over there.

Lurching forward, she strode down the road with as much stability as she could muster. A few snowflakes melted on her face, making her blink.

This was where I fought the soldiers. Kaeligs. She coughed and pointed. Yes. Kaeligs. I’m sure of it. And there was a huge wagon with prisoners here. Illiariel was up there, trying to free them.

Shylai’a spun around, surveying the street. How did I get here?

She ran up to the crumbling wall of the chapel ruins beside the street where it turned to the left. And this is where I first saw…

Her heart stopped. Her head spun and she tipped back against the wall.

Her eyes burned and blurred again as another shiver wracked her shoulders. Come on, girl. Come out of it. You can do it. Say his name.

But she couldn’t rip her eyes away, either. Tears ran down her shivering cheek as she stared, dumbfounded, at the place where she had first met Maan Korr. She had rolled under the prisoner wagon to draw away the guards while the elf girl Illariel had freed the people above in the wagon bed. She had looked out to see him fighting against swordsmen with no blade of his own. She had been entranced by him, by the motion of his feet and hands.

As momentary comrades fighting the same foe, their mixed-up group had quickly assumed a trust and swept her along in their adventures. She’d kept her distance at first, suspicious and questioning. Illariel, the wood elf, had been irritating, and her giant spider pet had been terrifying. Parith had been insufferable and Eddiwarth’s moping and pining had gotten old really quick. But all the while, Korr drew her in, and as they fought others in the streets, and each other at Eddiwarth’s home, she let her frozen walls start to melt and crack.

How did I get here?

As she looked now at the street, her head pounded, spinning, and her knees went weak. She crumbled against the wall, crying freely, her shoulders shaking. Her eyes clenched tight in a vain effort to stop the flood.

There I said it.

Korr, where are you?

She coughed, swallowed hard and gazed up with bleary eyes. He stood next to her offering her his hand like he had when they’d sparred so many days ago. He’d tossed her, sprawling, to the ground, then tried to help her up.

He stood over her, just like he had that day in the throne room when the dragon had been about to bite onto her. He threw the bright flaming ball of magic into its face, knocking its head back with the explosion.

She cried and screamed for him, like she had when she had seen his burned and crumbled body tumble from the mouth of a dragon, bathed in flaming bile.

Later, after the battle, she had stood over him, her clothes bathed in purple dragon blood, numb and empty of the killing rage that had consumed her.

She had run away from them all, from Korr, from Eddiwarth, back to the streets. It was safe, familiar, and solitary. She could hide, become invisible in the city. It was burned and broken, just like she was.

A few weeks later, she had seen Eddiwarth and another elf girl on the waterfront. They seemed to be looking for something or someone. A part of her ached to run to him, but she didn’t dare. She would have to tell him what had happened. That Korr had died because of her, protecting her.

She pressed the tears out of her eyes and reached up to take the vision of his hand, shaking with fear and fevered shivers. But he wasn’t there to take hold and lift her up.

“Stones, miss, are you a’right?” A high and harsh voice sliced through her crying.

She spun her head and opened her eyes, but saw no one. She blinked then wiped her eyes with her outstretched hand to try and clear the blurr. Even after looking to both sides, there was still only an empty street.

“Hu-h-who’s there?” She huffed through her tears. The prophet? No, that’s not his voice..

Did you ever wonder why the plague doctors wore those long masks with the beaks? They sure looked freaky, didn’t they. Well, the story goes that, since they didn’t know much about germs and germ theory back in the medieval days, they believed people got sick from the “miasma” or bad air. So, when the plague doctors went to see people who were down with the plague, they wore these masks, and stuffed the beaks full of fragrant flowers to counteract the bad air.

In Wynne, when this plague hits, there is no infrastructure to support health. No cleaning, no healing wizards (they’ve all be driven underground), nothing. The dragons ruined the government, and the noble houses are too busy fighting each other to take care of the citizens. So, the plague is all set to run rampant.