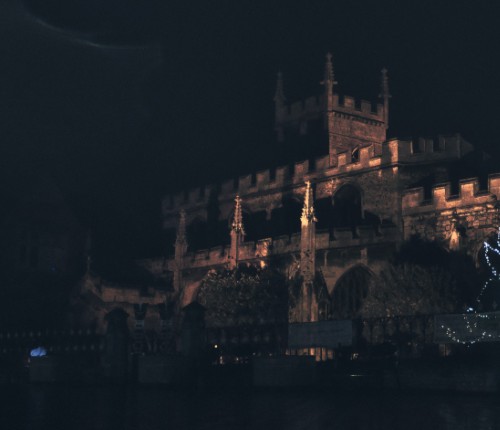 Photo by Jakub Pabis on Unsplash

The rain had started in force again a few minutes before, falling quickly and in waves with the wind. Korr leaned against the dripping wall of the palace and shook the rain from his cloak. Completely enveloped in magical darkness, he couldn’t see anything. At the moment all he could hear was the rain.

“Parith.” He said, halfway between a callout and a whisper. “Are you here yet?”

“He’s right there.” A voice just inches to his left said. Korr twitched, surprised that someone had been standing so close. “He’s right on the other side of you.” The unfamiliar voice spoke calmly and firmly as if he were making no effort to hide. Korr recognized the voice as Kiffra, the shadow mage that he had just met earlier that night. He was the one creating the cover of shadow that had gotten them over the InnerWall and through the palace courtyard. I admire his calm. Even in this tense situation, he is calm.

“Yeah. I’m right here.” Parith’s familiar voice sounded from a short distance to his right, also along the wall. “Too bad this shadow doesn’t protect us from the rain.”

Shylia’a’s voice spoke between them. “I’m just happy the dragons and guards can’t see us. I guess Parith was right.” Korr smiled to himself. I suppose that’s as similar to an apology as he will ever get.

Parith said, “With any luck, some of those beasts will get struck by lightning while they’re flying around up there.” Korr agreed.

“Actually,” Kiffra said in his same even tone, “If they’re dragons with striking magic, they can probably just flow the lightning away. From the looks of what I saw flying over the city earlier in the day, there were 17 red or yellow dragons. Of course, there could be more. Other dragons, like greens, blues, or whites, are probably inside right now. They might be outside, but not in flight, too.”

Korr looked at the dark space where Kiffra’s voice came from.

The mage went on, “There are six distinct shadow dragons, too. I haven’t seen them all flying today, though. Probably not. Probably not.”

Korr wiped a few raindrops from his cheeks that had fallen from his hood. Parith took command, “Yes, we do need to get moving. Here, Ari, take the rope up to the window as we did on the wall.” With a few excited hisses, Korr heard her scamper upward. Parith grabbed Korr’s arm, then put a wet rope into his hand. Korr gripped it. “I’m going to climb up after her. Can you anchor the rope? Maybe spot me again? It will be slippery this time.”

“In the darkness, it will be difficult to know if you fall.”

There was a moment of silence as Parith thought through this dilemma. “Yeah, I guess that we might need to turn off the shadow. Once we get in that window we will be fine, I suppose. Fortunately, it’s still pretty dark out here. Hey, Kiffra? Where are you?”

“I think you can drop the shadow cover now,” Parith said. Korr could suddenly see the shimmering surface of the palace wall, reflecting lights from windows and oculi across the courtyard. Kiffra leaning slightly to one side, with his head down. In the gap of his cloak, his hand stroked his opposite forearm nervously. Parith held onto the rope with one hand, and with the other extended a small pouch out to the mage. “Thank you for all your help,” Parith said.  Without looking up, Kiffra nodded and walked away. Parith tried to quietly get his attention, but the man didn’t look back. A minute later, it looked like he had dissolved into the shadows of the courtyard.

Shylai’a watched him go, then looked up at Korr, confused.

A crack of lightning broke the night, lighting the palace with instantaneous brightness. Shylai’a gasped and Parith jolted. A figure stood not more than a few yards from them, her long hair and pale skin drenched in the rain.

By instinct, Korr dropped into a stance and stepped closer to Shylai’a, who drew her sword. The silhouette was thin, and not very tall. Her shawl was a sorry excuse for a cloak, and her skirt underneath was soaked through. The frail creature stepped forward and in a soft, feminine voice, murmured, “I think I’m supposed to meet you.”

“Yes.” She nodded back and wiped her face with her hands. “I can’t stay out here long. When you get in that window, if you follow the hallway to the left, you’ll go up some stairs and find the cells where your friends are.”

She continued, “I think this is for you. Faldro said you would want it. I hope so. It wasn’t easy to snatch. I kinda got a lucky break.” Her hand rose up from under her shawl and handed Parith a dagger. It had a long leather-wrapped hilt and a curved white blade with ornate carvings etched in the side. Parith stepped back, surprised, then slowly reached out for it, looking it over with reverence. She added, “Yeah, that’s what you think it is. Use it well. Get in there and kill every flaming last one of them, and we can all be out of this stone-shaking nightmare.”

Raindrops flew as she tossed her hair and turned away, “I’d better get back inside before they see I’m gone and start looking for me. Bless your steps!” Before Parith or Korr could respond, she, too, had vanished into the rainy shadow.

“Thanks…” Parith murmured. “Bless your steps…”

The rope in Korr’s hand jerked and he looked up into the rain toward the window. He could barely make out the huge form of Ari hanging face downward on the stones in the darkness. She waved her legs and made chittering noises.

Parith handed the dagger to Korr and grabbed the rope, giving it a test tug. “We’re coming!” he hissed.

In the game, The Hero’s Tale (the system these stories are based on), each player picks a role for their character. One of those role choices is “the smart guy”. Actually, it’s “the smart one” because we like to be gender-neutral with smarts, but it turns out that “smart guy” is a much better search term. Go figure.

Anyway, there are two kinds of smart guy characters. One is the more traditional one that is studious and has lots of knowledge at their fingertips. The other is the one who knows people and can find things out from the world around them. Parith is the second type of smart guy, and Mithrabella (like Granthurg in the first book) is the more common type.

Mithrabella will be a fun character in book 4. I’ve got big plans for her in the story!