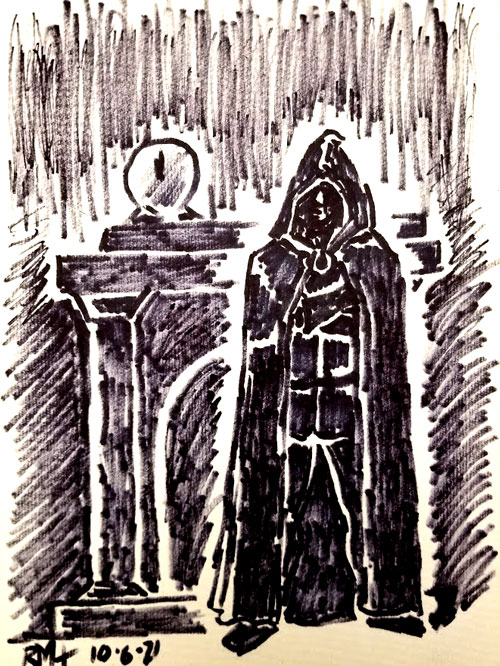 A Champion – The Knight of Shadows

Tonklyn jolted upright in bed, drumbeats pounding in his head. He sucked in a gasp of breath and pulled his sweaty hair back from his eyes.

He took another breath, longer and slower, and the pounding started to calm, but he still felt his heart thump in his chest.  Ah. Wait. That’s what I’m hearing.

All around him was dark and stuffy.

He ran his hand over his velvet bed covers, recognizing the smooth feel. He grasped at his arms, then relaxed a bit more as he felt the soft linen of his familiar nightshirt.

The drumming in his head now eased and his breaths became light and easy. He sighed heavily, once, and leaned forward over his knees. A nightmare. That’s all it was. A nightmare.

Wasn’t it? He tried to remember the dream, what had frightened him.

No, I can’t remember it. I’ve got nothing. I need a drink.

He rolled to the side of his bed and pulled back the drapery. Immediately he felt the cool breeze and heard the distant trilling of crickets drifting through the open window of his room in the old king’s palace. He felt for the small table at the side of the bed, and, finding it, began to feel across its surface for the carafe of wine he’d left there the night before.

Where is it? Wait a minute.

He reached up to his headboard and the corner post of his bed, grabbing his ministerial staff. He willed the oculus hanging from its head to illuminate and it began to glow softly. The table appeared in his field of vision, with a carafe and a glass next to a small book.

Ah! Here we go. He sat up on the edge of the bed and poured a little of the wine into the glass. After giving it a swirl or two, he sipped and stretched.

A man stood, dark and silent, watching Tonklyn from the middle of his chamber, shrouded in a hood with a long cloak draped across his shoulders. Black and purple mists danced around his feet, obscuring the rug.

Tonklyn jolted back away on the bed. The carafe and the cup fell to the floor with a crash, spilling wine across the rug. Eyes wide, He tried to shout, to call for his guard, but he could only gasp for air. Tension shivered through his arms and spine.

An assassin! Here to kill me! He scurried across his bed to the headboard. Kirraxal has sent one of his dragonbonded to finish me! An unworldly aura of cold deepness surrounded the figure, as if he could, at a moment’s notice, suck Tonklyn’s soul away into… into where?

“Tonklyn,” the figure spoke, his voice deep and reverberant. He was tall and muscular with a regal bearing. Between the halves of his cloak, Tonklyn could see dark clothing and a glint of chainmail across the upper chest. The drape of the cloak revealed that he had a sword, but it wasn’t drawn at the moment.

Wait. This isn’t right. The dragonbonded don’t talk. Who is this? Tonklyn could see a hint of a human face under the shadow of the deep black hood. He snatched up the staff and pointed it threateningly at the man.

The man didn’t react and just said, “Tonklyn, your time comes soon. You must choose.”

Tonklyn looked more closely. “Who are you?”

“I am,” he said, parting the cloak, bowing, then gesturing to himself with a dark-gloved hand, “the Knight of Shadows. I’m here to help you.”

Tonklyn’s eyes narrowed. “Help me? How?”

The knight’s hand rested on his sword hilt. His tunic, his leggings, everything he wore was a finely-tailored black. “You’ll be facing changes, challenges, and choices in your path ahead. Where are your loyalties? Who will you serve?”

“Your god sent me to you. I am his champion. You’ll be making important choices soon.”

“My god?” Tonklyn interrupted, “What do you mean, my god? I don’t have any god!”

The knight shook his head. “Oh, but you do. Everyone does. In this world there are but two gods; The Creator,” The knight took a breath, “or the Destroyer. Which one do you serve?”

Tonklyn’s eyes narrowed and he spat, “I don’t know about any gods, and I don’t serve the ones I’m told about! I serve myself!  I know of two peoples in this world; winners and losers. I have already chosen which one I’ll be.”

The knight’s shadowed lips formed a smirk. “Yes, it appears you have.”

What does THAT mean? Tonklyn shifted the staff to try and see the man’s face better. It began to shift into a mist.

“Remember, Tonklyn, that changes and choices are coming,” he said as his body dissolved into shadow.

Tonklyn stared into the space where the man had stood. Beyond he saw the far wall of the chamber, with its bookshelf and empty fireplace. A soft chair sat next to the hearth. Changes and choices? What on the Creator’s Earth does that mean?

In the Theology of Wynne, there are only two gods that all of the nations know. Though each ethnicity has given each one their own names, they are basically The Creator and The Destroyer. The Creator is the one that made the world and wants everyone to live on it in peace and harmony. The Destroyer is, well, the other guy.

Each god has his own servants or angels. Each one of these is called a Champion, and they’re mortals who have lived lives serving their respective diety so well that when they die or get ready to pass on, they are ascended into more direct service. They become a champion.

The first champion that we were introduced to in the early part of the Tale of Heroes was St Ivarr. He visited Thissraelle and Antonerri. Later, Shylai’a and the rest of the party were aided by The Mad Prophet.

Now, Tonklyn is being visited by the champion The Knight of Shadows. Looks pretty dark…