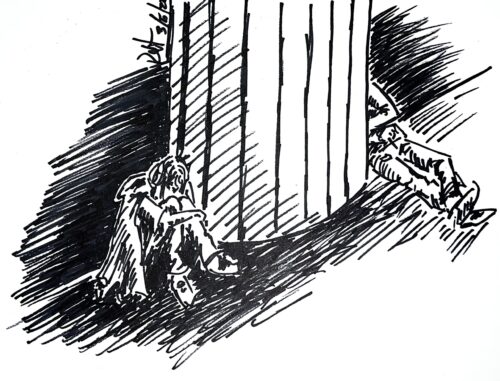 Parith strode through the main door of the great hall and surveyed the foyer. He stepped over to look down the eastern corridor then recrossed the foyer to check the western. Each one bent back, after a few yards, to sweep around the throne room. Daylight was starting to shine in through the windows on the left wall, though it wasn’t direct enough on this side to ignite the colors of the stained glass. He ran his hand down his face. If she’s run off…

He sniffed the air a few times and then wrinkled his nose. There were too many mixed odors floating in the air; smoke, sweat, blood. He couldn’t pick up on any one person. He turned around to go back to the foyer but paused when he heard a whimper and a sniff. His forehead creased as he listened more intently. Is that…crying?

He crept along the wall, and the sobbing grew louder as he moved. Hiding behind a buttress support, he listened to the high-pitched whines and chokes. His shoulders sank. Yeah, that’s her.

He heard her gasp, startled, then sniffled and squeaked, “Who’s that?”

Parith leaned his back against the wall and slid down to the floor. “It’s just me.”

Her hesitant voice drifted around the pillar, “Go away. I’m fine.”

“I was just looking for a place to relax. It looks like you found a good one here.” He stretched out his feet in front of him, crossing his brown elven boots at the ankles. She sniffed a few more times.

He heard the rustling of her clothes as she shifted position, but she didn’t say anything. Parith didn’t, either. He would wait it out and let her open up.

“What happened?” It didn’t take her long.

“What happened to us in there?” Her voice chirped, choking on tears again.

Parith took a deep breath. “I honestly don’t know how to answer that. Some in that room were trying to do horrible things, and some were trying to stop them. A lot of the others weren’t sure who was good and who was bad.”

Another moment of silence followed. “I’ve been in fights before,” she said, then choked. “I’ve even killed things in the forest so I could eat. Most of the time when I’m in fights with people, I’m running around healing, or throwing up walls to keep people safe.”

“I’ve never,” she held back a sob, “never ever seen anything as… as brutal as what happened today.”

Parith rested his head against the wall and squeezed his eyes shut. This is going to be so hard for her. She doesn’t deserve this. She’s just a kid! What a flaming, shaking horrible way to grow up.

“Why do beings hate each other so much? Dragons, humans, wood elves, high elves…” she asked, “Eddiwarth was right. There was no reason anyone should have died in there. They weren’t fighting for food or for survival. It was all just… anger.” Her question hung heavy in the air.

“You know, kid,” Parith finally said, “I have no answers. I’m sad that you had to go through that. But, for selfish reasons, I’m glad you were here with us.”

After a long moment, she croaked, “…You are?”

He laughed quietly. “No, I don’t hate you. I promise,” He ran his hand through his hair. “I just… get irritated too easily.” He stood and looked around the pillar. She sat in the corner of the wall and the buttress, her knees up to her chest, trying to be as small as possible. Her nose was red and her hair scraggly and she still shook with the occasional sob. Her bleary eyes peered up at him. “You saved my life our first night here in the city. I’ll bet you’ve saved all of our lives at one point or another. And that doesn’t even include all of the people on the streets you’ve helped.” He held out his hand to her. “I need to get back with Eddiwarth. They’re trying to convince him to be the King, if you can believe it. And we all know how that would turn out.” He smirked and Illariel giggled. “You can come back in there with me if you want. Or, you can stay out here for a while, if you need to.”

She smiled and wiped her eyes. She took his hand and stood, then swung her arms around him, pressing her face into his chest. He stiffened for a moment, then wrapped his arms around her tightly, resting his head on hers. He held her for a moment until she released her grip. She looked him in the eye and said, “Thank you.” He ruffled her hair.

He walked along the hallway with his arm around her shoulder. “I’m really going to miss Korr,” she said, softly, looking down at the ground.

He nodded and his own eyes burned and watered. “I know. I don’t know how I’ll handle that.” As they entered the foyer, she stepped free of him, wiping her nose. He said, “I think I’ve been away from Treehaven for too long.”

Trauma is tricky to write about. Not only is everyone that deals with trauma a little bit different, but I want to respect and not diminish or trivialize trauma.

Even though Illariel is comforted here in the moment, her trauma is far from over. As I’m thinking about the next story arcs in book 4, I’m thinking a lot about how her trauma experience will impact her life. If you have any experience with trauma, especially from combat, I’d love to hear about it in the comments.