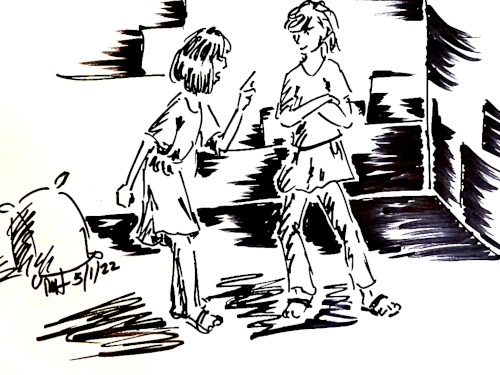 Tales of the Heroes – DeFrantis

Tales of the Heroes

An excerpt of a short story By Mark Hansen

“What?” Tomanas hissed back, glancing over his shoulder. “Come on, before the patrols march by.” He inched along through the shadows of the city night, his hand touching the cool rock of the high wall on his left.

“No. We could get in real trouble out here,” she said, reaching out to touch his arm. “We should get back to the orphanage.”

“Really? Are you scared?” He spun around, grabbing her wrist tight and yanking her close. His head dipped forward, his lips in a mocking pout. “Are you a scared, baby girl?”

She jerked her hand away, scowling. “I’m not a baby. I’ve got twelve winters.”

He leaned back and crossed his arms. He cocked his head to one side and gave a smile, edged with a smirk. A lock of auburn hair had slipped down onto his light-skinned forehead, looking almost ghostly in the half moon’s light. He lifted one eyebrow and nodded.

Oh, he does look cute when he does that. He reached out and took her hand. DeFrantis dropped her eyes as she felt her face flush. I’m not a baby. Besides, he’s only got thirteen winters. He’s not much older than me. She swallowed hard, steeled her shoulders, and looked him in the eye. “And I’m NOT scared.”

He broke into a full smile and turned back around. “Good. You know I won’t let anything happen to you. Right? We’ll be fine.” She turned away so he couldn’t see her embarrassed smile. Tomanas was one of the few friends she had at the orphanage, and he’d only shown any interest in her recently.

DeFrantis sighed and drew her cropped black hair behind her ear, then reached up to the wall behind him. Unlike the muggy hot summer air, it was dry and cold. She moved along as quietly as she could, glancing behind every so often. This was called The Innerwall, the tall forbidding barrier between the slums outside and the merchant and waterfront quarters of the City of Twynne Rivers. The half-moon was high in the midnight sky but, at the moment, obscured behind the parapets at the top of the wall. To her right were hovels and shanties, some thrown together merely of scraps of wood with some thatch overhead, and others with actual wattle and daub walls. A bony dog shuffled along and sniffed at the air as it passed them in the dusty gap between the buildings and the wall.

She heard a loud bang from behind them and jumped, sucking in her breath. Her eyes scanned the dark between the homes, her heart slowly calming. I’ll bet it was just a pot being dropped somewhere in a shack. Maybe some animal knocked a shovel over.

Tomanas paused and glowered back at her. He sighed, tugged at her arm again, and they moved on.

This is insane! What am I even doing here? He’s going to get us killed. Maybe I should just go back. So what if he thinks I’m a baby? That’s still better than being locked away… right?

Before long they came to a corner where the gradual curve of the wall was interrupted by a large round gatehouse tower. They huddled together in the darkness of the corner where the wall and tower base met. DeFrantis looked up at the parapets that topped the tower. It seemed so high above. She could see lantern light shining from the platform. Across the way, she saw the road that came out of the gateway. It was dimly lit, too, by what she knew would be lanterns on either side of the gate. The road wasn’t wide, and it faded off into the darkness of the slum.

She squinted at one of the buildings on the other side of the street. “I know this place,” she whispered. “This is the gatehouse where we sweep every week.” It looked so different during the night. Everything did.

She continued, “They give a few coins to Mumma for the orphanage every time.”

“Yep. Every week,” he said casually as he crept along.

She furrowed her brow with a question.

“So,” he nodded, “I figure that they’ve got to have more coins in there than Mumma has at home.”

Tomanas crept forward, around the tower base, and stopped just under a dimly lit window. DeFrantis stumbled after him. “Plus, they have soldiers in the guardhouse, right? Soldiers have to be paid, right?” He smiled and winked back at DeFrantis.

She gaped at him. “You’re going to rob them?”

He put his finger to his lips, then leaned in close to whisper, “No. We’re going to rob them.”

DeFrantis’ eyes flared wide. “Are you crazy! I’m not going in there!” That’s it. I have to get out of here. I should just bolt and run. He can’t stop me. She looked at the dark and forbidding city surrounding her. I’ll bet I can find my way back to the orphanage.

“You won’t have to.” Tomanas’ voice jolted her attention back. “All you have to do is two things: first, you make a block out of shadow right here. I’ll stand on it and climb in the window. Then you make it dark in the tower and I’ll sneak around and find the silver. Simple. We’ll be fine.”

DeFrantis stared at him, her breathing shallow, her jaw slacked. She started to slowly shake her head. He knows I make shadows! How does he know? Nobody’s ever seen me! “No. I… No, I can’t…”

He’s seen me? But how…? “But that’s just at night when I get sca-” She cut herself off.

Tomanas laughed quietly. “I thought you said you weren’t scared. Besides. I’ve seen you sneak extra tarts away from the kitchen at night when you think nobody else is awake.”

“Different?” Tomanas finished. He looked down at her with an intensity that made her break out in a cold sweat. She shrunk back. Then he smiled and his expression softened.

DeFrantis had a troubled childhood, it’s true. Raised in an orphanage, then turned away into the streets, she became like an older sister to many of the other children in her beggar’s bond. As you read in Book 1, “Of Children and Dragons”, she had a rocky relationship with one of her peers in particular, a selfish and ambitious young man named Tomanas!

This post is an exciting exerpt of the story (the full story is just about 5000 words) of how they first became friends at the orphanage, and how he came to influence the changes in her life. You can read the entire story two ways: by joining my Author mailing list below (not only will you get this great new story, but you’ll also be notified of all of the story posts here at ATaleOfHeroes.com – at an exciting time, a Book 4 is just about to start!

Another is by becoming a patreon patron! For next to nothing each month, you’ll get access to all of the backstories as they’re written (two are done already), and get notice of all of the scenes and news.

So, join the fans of the Heroes of Wynne! Be a Wynner!