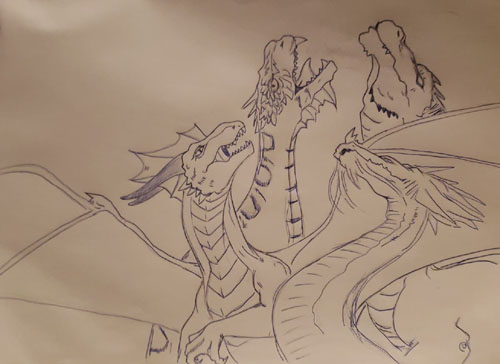 Tonklyn heard snarls and roars as he approached the massive doors of the throne room. A few artisans stood on shaky scaffolding erected around the right-hand door, chiseling away the flame damage and carving new designs in its place. Some of the old patterns were being restored, others altered, depending on the damage.

Everyone paused for a second as a loud rumbling of snarling voices filled the hallway. Even muffled by the door, Tonklyn recognized a few of the old draconic curse words being shouted.

Ooh, could there be trouble in paradise? That sounds like Exakas’ voice. A familiar tension made his stomach twist. It was a strange mix of fear and excitement. On the one hand, being a small weak human in a council of ruling dragons was terrifying. At any moment, a temper could flare and he could be roasted like a pig in a pub. On the other hand, instability also meant opportunity. As long as the dragons were fighting, and they weren’t mad at him, he could keep working on them. He was balancing it all like an innkeeper with a platter, swaying from side to side as he strode through the chairs and brought it all to the table.

I must be hungry. When is dinner?

A pair of robed figures scurried to open the left door and the din of the argument broke into the open air. No longer buffered by the closed door, Tonklyn could easily make out the words.

“What wouldst thou have me do?” Xintalan shouted in the old tongue of the wyrmkin. “Was it not I who flew with the captives? Was it not I who called them to action? Was it not I who taught them the song?” She shouted at Exakas, but her gaze shifted back and forth between him and Kirraxal.

Tonklyn stepped into the room, walking toward the dais where Kirraxal sat. My skills in the old language are getting quite good if I do say so myself. I don’t dare speak it, but I don’t think they realize how well I can understand it. He tapped his cane in time with his steps, making no effort to hide his presence. Maybe they just don’t care.

Kirraxal looked down on them from his slightly higher perspective on the dais. The afternoon sun shone onto his black scales through the gaps in the windows and the ceiling. Tonklyn noticed that these repairs had been slower to start. Most of the smaller drakes that typically squawked and chattered in the rafters were silent at the moment. If the dragons were angry, the drakes didn’t want to get them more upset.

Kirraxal huffed out a breath of sulfurous smoke. Tonklyn thought his expression was almost one of exasperation. How very ‘human’ of him! That thought made him smile.

“What wouldst thou want to do?” Kirraxal’s voice was deeper and raspier than Xintalan’s, and carried a note of weariness, “Wouldst thou lead the charge? Wouldst thou take the battle against Emberfire City from our duly appointed general?” Exakas puffed his chest and flexed his wings.

Tonklyn ascended the steps at the side of the dais.

Exakas lowered his head, straightened his neck, and narrowed his eyes. He snarled, dropping the wyrmkin language for common speech, “You should know your place!”

“My place?” Xintalan drew back and unfurled her wings. “My place?”

Tonklyn felt the air rush past him, shaking his hair and robes. He pursed his lips. Oh, did he just say that?

Kirraxal was quick to react. He roared between them then turned on Exakas, teeth bared and his right claw raised and braced to slash. “You will not speak to my Queen – your Queen – so disrespectfully!”

A hush washed over the four of them as Kirraxal flexed his claws menacingly. Tonklyn took a moment to run his hand through his hair and adjust his ministerial robes.

Xintalan made an uncertain shift back and lowered her head just a bit. “Queen?” She whispered with hesitation.

“Yes. Queen,” Kirraxal pronounced. “You are the Queen, and your place will be nesting with me. Your King and consort.”

Xintalan held her breath, her eyes betraying a touch of fear. “Your Majesty… I… “ She’s not so determined here, where she’s outnumbered, is she? There are some very interesting dynamics going on here.

It was Kirraxal that dropped his head and his voice, now, taking on a menacing, guttural tone. “Thou art my Queen, and thy place,” he drew out his sentence through his teeth, “is by. Our. Side.”

Xintalan turned her face and dropped her gaze. Kirraxal raised his head again, his decree issued, her fate decided. Exakas relaxed, and Kirraxal continued in the common tongue, “Exakas will fly to Emberfire. He will lead the dragons there to freedom and punish their oppressors.”

And, not coincidentally, decimate the high elves, eliminating the last nation that could possibly challenge your throne. Tonklyn looked up at Kirraxal and nodded smugly. You’re welcome.

Kirraxal continued, “When he brings us word of his victory, you and I will return to our mountain palace and we will rule the entirety of the land, unquestioned and unchallenged from there.”

Tonklyn’s full attention snapped into place. Wait. What? Mountain palace? Graemal? Tonklyn looked up at Kirraxal with wide worried eyes. When was this decided? Why wasn’t I told?

Kirraxal raised his head and roared. The noise rang through the hall. Exakas immediately raised his head in accord. Xintalan followed, but with noticeably less enthusiasm.

This changes everything. Tonklyn flexed his grip tighter on his staff. His chest felt constricted. He took a deep breath and tried to shut out the rumbling in his ears. This will be fine. I can adapt.

This is not a problem.

Author’s Note: To Be the Dragon Queen

If you’re married or engaged, you probably remember the moment you got (or gave) the ring. It was probably pretty exciting.

Now dragons don’t mate for life, at least not the dragons of Wynne, but here, Xintalan is told that she’s to be the Dragon Queen. And she’s not too sure she likes it.

First of all, the moment wasn’t particularly romantic, and second, and worst of all, she doesn’t really get a chance to decide. Does she want to be the Dragon Queen? It has some perks, like wealth and fame. But Kirraxal, the one making her the dragon queen, isn’t really the kind of king she wants to spend her life with. Especially since, in his mind, the role of the dragon queen is not much more than standing by and laying clutches of eggs.

But then, part of the option includes carrying on living and not getting killed, which is a bonus, right?