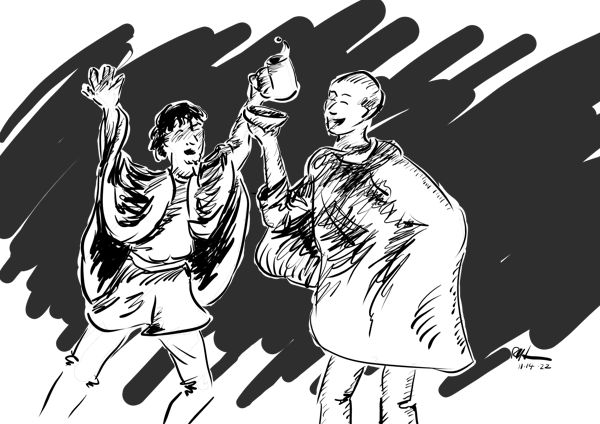 Interludes – The Problem with Kings

“I am the king!” Tonklyn asserted. He pulled his cloak tighter around his shoulders, holding it against the cold. He shifted it back and forth under his chin as if he was adjusting a regal cape. The end of it was snagged under his leg as he sat on the cold stone around the early morning campfire of the  beggar’s bond. Annoyed, he tugged on it again, to no avail.

“Yeah, so we heard.” Tombo said, refilling his cup with hot brew from the fire. Everyone that was awake in the chilly dim tightened themselves in a circle around the small fire. “Is Melyea up yet?”

Another man offered an empty cup for refilling. “I think she has already left. Shylai’a went with her.” He accepted a steaming cup with a shoddily gloved hand and took a sip.

“Again?” a third man asked. He counted off his fingers in the air. “That’s, what, how many times this week? When do I get protection?”

The other sipped again. “Aren’t you a grown man? Can’t you protect yourself?” He grunted. “You just want a chance to ask if she’ll dance the circle with you at Winterfest.”

Tonklyn glared at them all across the fire. For weeks, now, he had tried to convince them who he was, but they weren’t interested in hearing the truth. I am the king. You imbeciles can smugly run about your measly lives all you want. It’s only a matter of time before I wear the crown again.

“Ey!” a sharp and small voice sounded to his left. “G’morning!”

“Not you again,” Tonklyn sighed. He didn’t even look. He recognized the voice, but knew he wouldn’t be able to see Verd there anyway. “I had hoped you would have disappeared.” Tonklyn smiled at his own wordplay.

One of the beggars took his eyes off his brew long enough to look skeptically at Tonklyn. “Who’s he talking to?” The man beside him gave only a shrug and a shaking head in return. Looking back at Tonklyn, the beggar squinted as if trying to figure the odd man out.

Tonklyn set his shoulders back and sipped his brew. He looked away, trying to hide his tension under the beggar’s scrutiny. He felt a tug on his shirt sleeve, but he ignored it. The high voice whispered in his ear, “Are you going out begging this morning?” Tonklyn shook his head as if he were trying to shoo away a fly.

Silence hung heavy like the smoke of the fire and the other beggars glanced back and forth at each other. The companion in the seat beside him nudged him and scowled. “Ah, you’re new here, but the rule is that nobody has to tell their story here in the bond.”

“Yeah?” The man’s narrow eyes reflected the red firelight. “Well, he’s the one that brought it up. I’m just asking’s all I’m doing. It’s one thing to say you’re the king, and another to say how it happened.”

Tonklyn glanced around the fire. It was true that nobody is forced to reveal anything to the beggar’s bond. No questions are asked, no answers required. That’s the rule. But all eyes around the fire were on Tonklyn, and the question hung in the air like the frozen breeze. Someone coughed.

Tonklyn humphed. He looked at his feet, then squared his shoulders and set his jaw. “I killed a dragon.”

All around the fire was stunned silence. Only the crackling of the fire itself broke the still. They are stunned, in awe. There should be trumpets right here. And applause.

A chill blew past Tonklyn, shifting his hair under his hood. In the awkward cold, he scanned their blank faces in the flickering light, looked away, and took another sip of his cup. The brew was getting cold.

The challenger broke the hush with a burst of laughter. “A dragon? You killed a dragon?” He dropped into a fit of guffaws, and others around the fire gradually began laughing as well. “You, the great and mighty one, rose up and slew the dragon! And the good people of the village were so happy that they crowned you the King!”

He stood with his cup raised majestically, “All Hail king Tonklyn, Dragonslayer! He has freed us all from the wrath of the great beast!” The other beggars rose, one by one, laughing and toasting him with their cups. “Huzzah for the King!”

“That’s not how it happened! It wasn’t like that!” Tonklyn stood with them, shouting over the din. “I made him the king first, and then I killed him. He killed the king, then I killed him, so I became the king! Listen to me! That’s now it happened!” It didn’t help. Grinning and still laughing, they bowed, drank to his health and long royal life, and began to disperse to their daily begging.

“No, listen to me. It’s all true! I am the king!” He started to follow after them. “After that another dragon attacked, and…” Tonklyn stood, hands and teeth clenched tight, watching them go. His eyes burned with anger and tears as the laughter faded off into echoes in the streets. His temples pulsed with each heartbeat. Flaming fools! Destroyer take them all! They have no idea what they’re laughing at. They don’t know how it happened. He shook his clenched fist in frustration, flailing his arms in the air.. I planned the attacks! I toppled the rulers! I forged the kingdom! I made Kirraxal, and I brought him down! It was me!

“Silence!” Tonklyn shouted to wherever that insipid voice was. “I’ve heard just about enough out of you!” He turned back to the fire. Only Kiffra and a couple of the ladies of the bond still sat in the circle, staring at him. One of the ladies stood and began gathering up the empty mugs and scrap bowls from the places around the fire. She handed him an armful. Without thinking, he took hold of them. He stared down into the hollowness of the cups. He was the King! He was the victor! Why was he here, now? Why, then, did the victory feel as hollow and empty as these tin mugs?

The woman clapped him on the shoulder and pointed to the washing basin. “That’s the problem with being King,” she said, “Someone always comes after that’s a bigger king than you are.”

Author’s Note: The Problem with Kings

What’s the problem with Kings? They keep getting swapped out. There’s always another one that comes along and sweeps you off the throne. That’s what happened to Tonklyn. That’s what Tonklyn did to both Hastonne and Kirraxal.

Kings come and Kings go. Maybe that’s why Heathrax didn’t want to have anything to do with the politics of Twynne Rivers.