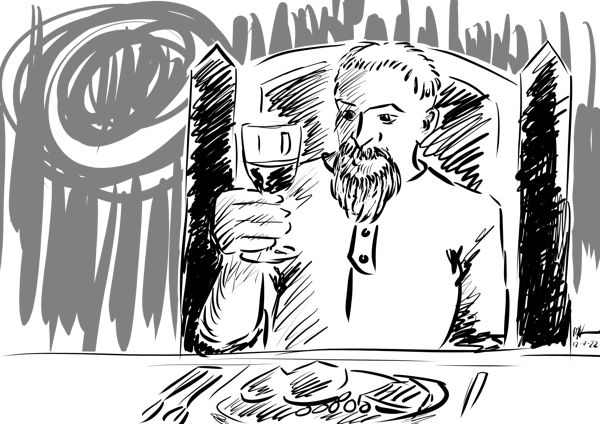 Faloren stroked his long and graying beard as he leaned back in his chair. The soft blue velvet on the gently angled back support accepted his shoulders and caressed them in relaxation. He touched the plate of venison and tubers on the table in front of him and pushed it an inch or so away. He looked across the long table of his manor’s dining hall at the three other men still finishing their meals. The table was lit by two chandeliers hung from a high vaulted ceiling. Many crystals reflected and refracted the light from a half dozen oculi suspended in the middle of each one.

A few candelabras also sat on the table, along with evergreen Winterfest garland interspersed with the decorative silver and ceramic trays laden with meats, fruits, and bread. Servants busied themselves refilling cups and assuring themselves that the food was replenished and the master of the house was satisfied. A trio of musicians, a lutist, a piper, and a young girl at the hand drum played winterfest carols with just enough fervor and passion to not be noticed. A Winterfest party like this one should have had the dining hall filled with celebrants, eating, laughing, and dancing. For now, just the one man and his three friends sat.

Faloren picked up his wineglass and swirled it under his nose for a moment before taking a sip. “That’s a really good question, Cromdell.” He finally mused. “I’m honestly not sure if I miss the wizard’s guild.”

Faloren was a thin man, with hollow cheeks and bushy brows and sagging eyes. His brows pinched together as a thought suddenly disturbed him. “Why do you ask?” he scowled, “Is Jaxil back in the city?”

Cromdell was quick to swallow his bite and respond. “Oh, no, by the Creator, no.” He was a larger man, both in height and girth, and his puffy cheeks sported a few weeks of beard growth.

Faloren grunted with satisfaction. “No, of course not. He’s made himself a new life in Emberfire. A gem dealer or some such. From Guildmaster to a simple merchant. A shame for him to step down so far, but not too surprising.”

Faloren enjoyed a vengeful laugh. He had joined the Twynne Rivers Wizard’s Guild as a youth and had risen to the rank of instructor, then finally into the guild ministry. True, Jaxil was the Guild Master, but everyone there knew that Faloren ran the day-to-day management of the hall. Jaxil had been appointed the formal Master by the Mage’s Council in Emberfire. The choice had angered Faloren. High elves meddling in the human kingdom. See where it got them. The whole thing had crumbled two summers past when some upstart cultists in the Dragon’s Flame attacked the church and set the guild up to take the blame.

That attack shook everyone. It undermined everything he had spent his life so carefully building; the connections with the Church, the confidence of the King, and the reputation of the wizards in the city. Immediately after, they all pulled inside the guild hall. Faloren himself had ravaged through the ranks of the guild members, trying to find who had participated in the attack. Before he was able to find the culprits, the King had turned on them with their armies and raided the guild hall. Faloren still remembered the bitterness and humiliation as he ran through an open dimensional portal to escape the raid, then scurried like a thief through the night to run from the city.

Jorman responded, “It’s a good thing you got out when you did, even though it wasn’t so pleasant when it happened.” He was the youngest of the three, dressed in light blue formal mage’s robes.

“Quite. Well,” Faloren mused quietly, “they all eventually got what they deserved.”

“Yes, they did!” Thomset asserted, raising his glass as punctuation to his declaration.

I got what I deserved, too. A nice manor in the country, plenty to live on, and a front row seat for the karmashow! Happy Winterfest to me!

Faloren continued, “The Dragon’s Flame had their day in the sun, and our dear King Hastonne became dragon fodder. If they hadn’t put so much effort into arresting and oppressing so many wizards, we would have been able to help him fight them off. As it stood, most mages ended up recruited to the dragon’s side.” He took another sip, and added under his breath, “The cowards. Now the city lies in ruin, ravaged by anarchy and plague.”

“It serves them right, doesn’t it?” his friend toasted and drank.

“I’m glad to be out of that tangled dungheap of fools. I played the game for too long. In the end, there was no gratitude, no respect.” He looked into the hearth, where glowing Winterfest logs, laced with syrups and saps, burned with festive multicolored flames. He sat in one of the finely carved chairs on either side of the stonework. “And now, let the deepest stones of the earth shake them all. I don’t care. I just don’t care.”

There was a deep and heavy silence before Thomset ventured, “Are you sure about that?”

Faloren’s raised a brow. “What do you mean?”

“Well, Cromdell, Jorman, and I,” he said and indicated each in order, “have been talking amongst ourselves, and we wonder, well… if…”

Faloren’s head turned, unsure where this was going.

Cromdell finished, “What Thomset is saying is simple. We think it may be time for wizardry to return to Twynne Rivers. And it should return in a much stronger role.”

Thomset continued, “Yes, well, the situation in the city is, as you say, in total chaos. Wouldn’t now be the time for wizardry to assume its rightful place in society? We are masters of the secrets of the universe. Aren’t we best suited to rule a kingdom like Wynne?”

“A wizard king?” Faloren looked on, bemused. He scrunched his lips in curious contemplation. “An interesting thought…”

Jorman suggested, “Why should we work in the shadows? Why not step up and run the land from the top?”

Faloren frowned. “Surely the noble houses would resist such a move. Aren’t they already battling each other in the streets for the crown?”

Thomset leaned back in his chair, preparing his pipe.  He flicked his finger, summoning a tongue of flame to light the tiny bowl. “Yes, but none of them are getting anywhere. Some of them have long been happy to rule quietly, in the background. House Gregon has always run the commerce in the city. They’d love to just get things stabilized and settled into a new status quo, hopefully as close to the old one as possible. House Rengalin is content to run the underground. Between them and the Rogue’s Guild, there’s not a thief or spy in the city that’s unemployed! They’re probably the only house that’s truly benefited from the disorder.”

Cromdell jumped in, “Of course, House Yiar Din are as absent and aloof as they have ever been. So that leaves only the more dominant and military houses, Thornwell, Kaelig, and, of course,” he sighed, “Northil.”

“What are they doing?” Faloren asked.

“Fighting among themselves, mostly. Thornwell, obviously, thinks they have the divine right to the Kingdom. They do have a succession claim, but nobody really respects it. The Church of Three Lights, or what’s left of it, has mostly sided with them. The Kaelig militia is surging in the streets, but Northil and Tornwell are not having it, of course.”

“Northil is trying to be the peacemakers, to broker a cessation and set up some kind of ruling council, I guess. They’ve brought in someone to help them put it all together. He was the one who dissuaded the dragons and convinced them to leave, as informants say.”

Faloren smiled. “So you have informants?”

Faloren’s smile settled into a thoughtful smirk as he nodded. “Hmmm. Perhaps it is time for wizardry to get the respect it’s due. Perhaps it’s time to step in and properly save the kingdom.”

“Well, it’s certainly something to think about,” Cromdell decided, settling back in his chair and raising his wine, “While we’re enjoying the Winterfest…”

The three sat, quiet, listening to the music.

Way back in book 1, Faloren was a teacher and administrator in the Wizard’s Guild of Twynne Rivers.

Not a particularly good teacher, in my opinion, as he was a bit of an arrogant piece of work, completely uninterested in actually being a teacher. Why was he there? Probably to be close to the power brokers in the city. Partly as a ranking officer in the guild, attending meetings and counseling with the King’s court, but also as the teacher to the youth of all the noble houses and the wealthiest merchants and ministers in the city.

But now that there is no Wizard’s Guild any more, maybe someone could step up from teacher to Guildmaster. Or maybe even higher…?

Did you have a teacher you didn’t like or respect very much? Everyone talks about their favorites, but…