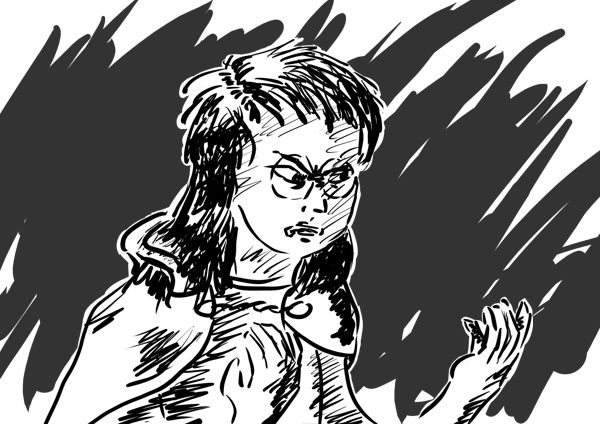 With a worried look to the sky, Mithrabella hurried her step. It was late in the afternoon, overcast, and starting to snow. The wind was swirling through the city streets, blustering her cloak. It would be dark soon.

A chill ran up her spine. Yes, it was cold out, brutally so, but the shiver she felt came every time she thought of that terrifying night. Most of the time she could keep her mind on other things, but late at night her dreams would sometimes return her to the roaring dragons, the flames, and the blood. Then she would wake up gasping, with wide eyes and shivers.

She definitely hated the dark.

If only this Destroyer-cursed city weren’t in anarchy and ruin, then the plague wouldn’t be ravaging the streets. Not only were her parents not getting better, but they were slowly sinking into fevered delirium.

Harva had told her to find the healing beggar in the Outerwall. At first, Mithrabella hadn’t believed her, but others echoed the story.  “He’s a wonderful man, an angel sent by the Creator! I was on the doorstep of death and he healed me up right away!” It wasn’t that Mithrabella doubted the power or the magic, but she worried about going out to find him. If you didn’t catch the plague yourself, you could get accosted, robbed, or worse, even by the soldiers themselves. Magical healers were hard to find, indeed, any kind of wizard would likely be in hiding. And if you did find someone, would they be a true healer, or would they just rob you blind? Finally, she saw no alternative. Her parents’ skin was harsh and rashed, their breathing shallow, their bodies weak. If she couldn’t find the healer, she knew they wouldn’t last another day.

Those thoughts sent shivers through her again as she strode down the street. Absently, she reached up and pushed her spectacles back higher on her nose. The metal felt cold. She rounded a slight bend as the road followed the river and she turned with it, recognizing the city wall not more than a few blocks away. She picked up her pace, occasionally jogging every few steps. The wind now at her back blew the snow and the chill past her face instead of aside it.

Finding the man was hard, though. All throughout the dingy and frightening Outerwall quarter, everyone seemed to have a different story to tell about him.

“Never says much of anything. He just sits there shaking his tin cup for coins.”

“I don’t know where he is. He’s usually right over there at that corner.”

Finally, someone had told her that he was actually a part of a beggar’s bond that lived in an old Innerwall chapel. St. Marden’s, they had said. She had spun around right away and headed back toward the big city gate.

There was a bit more activity as she approached the Waterfront section of the Innerwall quarter. Still not too much, not like a spring or summer’s day, but there were a lot of pubs for the rivermen with the soft glow of lantern light streaming out of the windows. A halfhearted attempt to hang Winterfest decorations on the oculus lamps on the buildings and on poles by the piers showed some festivity, but it was nothing compared to the elaborate lights and streamers of past years.

Finally, she saw the chapel not far ahead. Or rather, she saw the toppled ruins of what used to be the Chapel of St Marden. The snow was starting to fly a bit stronger, so she pressed forward.

The front facade of the once-holy building was mostly burned and collapsed. Large structural timbers and stones from what had probably once been the bell tower lay strewn about the stonework porch. Once grand pillars were toppled and broken. Dust and debris mixed with the snowdrifts that had piled up in between all of the pieces of wreckage. The great main doors were gone, probably carried off by looters long ago.

As she approached the openings, stepping carefully past the clutter, she heard voices from inside. The chatter and laughter was punctuated by an occasional sound, a heavy thunk thunk thunk. She crept over the threshold into the wreckage of what had been the foyer. She squinted to look through the shadows. There was a lighter space ahead, where snow fell through the collapsed ceiling of the nave and the choir. The aisle to the right was still sheltered, and a man in ragged clothing stood there, chopping up wooden beams and pews with an old axe.

“Excuse me, good sir,” Mithrabella said as she stepped over to him, “I’m looking for–wwoah!” She stumbled over some of the rubble and almost lost her balance.

“Steady, there, miss.” The man stopped chopping for a moment. “You alright?”

The man smiled and repositioned some wood on a makeshift block. He readied his axe. “Sure! You mean Kiffra! He’s back over there at the fire!” He tossed his head back to indicate a ways farther into the structure. Mithrabella squinted and saw a number of small dark figures standing around a fire’s glow. Muffled voices and laughter echoed through the ruins.

“Thank you, sir!” Mithrabella stepped carefully around him, giving him plenty of room to continue swinging the axe.

She approached the fire and saw many varied people eating a sparse meal of some boiled stew and a few morsels of stale bread. I should have brought a basket. We have enough to share. Why didn’t I think of that? She knew why. It was her mother that always thought of those things. She had been too worried about her mother’s fevered brow and her father’s gasping breaths to think of these poor beggar’s needs. If they get healed, I’ll definitely bring some back. I’ll bring wagonloads back for them.  She glanced around the circle, seeing the fire’s glow in their faces. One was playing a tin flute and she launched into an energetic melody of a winterfest carol. In a moment, most of them were singing, and the ones that weren’t raising their voices were still raising their bowls to eat. Mithrabella blinked away the chilly mist in her eyes. Her mind went instantly to her mother, whistling this tune while hanging lightshards and garland.

“Would you like some stew, miss?” A high feminine voice snapped her thoughts away from the song. “You can have a seat, you poor dear. Step up to the fire.”

“Oh, my dear, we’re all beggars in one way or another, aren’t we?” The woman was a plump and friendly one, a bit older, and bundled up in several layers of coats and aprons. She held a steaming bowl out to Mithrabella.

Mithrabella stuttered, wondering how to respond. Her reflexes accepted the bowl, but she didn’t know what to say. Finally, a few words came to her. “I’m… I’m looking for the healer.”

“Yes!” Mithrabella’s fingers were getting a bit warmer holding the stew.

“Is someone in your family down with the plague?”

Mithrabella nodded, suddenly remembering the purpose of her visit. “My parents. They can hardly breathe or speak and I’m really worried about them.” She reached out and grabbed the lady’s sleeve. “Everyone says he can help. I really need to see him.”

The lady put her hand gently on Mithrabella’s arm and led her to the ring of celebrating beggars around the fire. As she approached, the song waned and finished, diminishing into laughter. The singers returned to their bowls. Aside from a few glances, most paid no attention to her.

“Kiffra,” the lady said, placing her hand on an older man’s shoulder, “this young miss needs your healing help. Her parents are deathly ill.” He looked up with a blank expression on his wrinkly face, his sharp and scruffy chin tilted to one side.

“Thank you! Thank you so much!” Mithrabella bowed deeply. “I really hope you can help them! I don’t know what I’d do if–” As she rose back up, she glanced around the circle. A gasp of breath froze in her chest. A shiver wracked through her shoulders and down to her knees, making them weak. The bottom dropped out of her stomach and her blood flowed away with it. “No! It can’t be.”

She dropped her bowl, splattering stew all over the floor with a clang. Her hands jumped to her forehead. Her wide eyes fixed in terror on the man sitting next to Kiffra. He wore a black cloak with the hood pulled back and slurped inattentively on his stew.

Tonklyn glanced up at her from his bowl with a surprised furrow across his brow. “Mithrabella?”

The Anti-Hero (read about it here) is a fascinating concept in fiction. Especially in a series called “A Tale of Heroes”! An anti-hero is a primary character that is not so heroic and not so wonderful as a traditional hero. An anti-hero may be flawed and even villainous at times. An anti-hero might be good at their core, or even attempting to do “good”, but going about it the wrong way. An anti-hero is often broken themselves, unsure of what “good” really means.

Given that description, almost any of the five-man band (using the term generically) could be considered an anti-hero. Tonklyn, for example, is one of the main characters in the book. He’s clearly flawed and broken, and it’s easy to hate him. I’m hoping that, by now, you readers might be getting the sense that he’s having to face his selfishness.

Any of the other characters have their share of “anti-hero” in them as well. Shylai’a, Mithrabella, and even Xintalan are on that scale at some point. That has made this book one of the most exciting and challenging to write.